geeta vemula
Ranch Hand
Posts: 208
posted 13 years ago
I got it from
http://www.danchisholm.net/oct1/mybook/chapter16/exam1.html

Which object is not eligible for garbage collection after method m1 returns?

Answer is g.
Exlanation is : Please note that this question asks which object is NOT eligible for garbage collection after method m1 returns. The objects referenced by i1, i2 and i3 form a ring such that each object is referenced by another. Even so, nothing outside of method J.m1 references any of those objects. When method J.m1 returns, the ring becomes an island of isolated objects that are not reachable by any part of the user program. A key point to remember is that an object that is referenced by another object can be eligible for garbage collection if the two objects form an island of isolated objects.

Also please suggest me how to draw diagrams here to post .. Because just now i try to draw in word but after that i couldn't able to cut and paste that diagram here.. so all my energy went waste.. so please help me out..

Thanks,
Geeta Vemula
James Tharakan
Ranch Hand
Posts: 580
I like...

posted 13 years ago
All the objects are local to the method.
When a method returns all are eligible for GC

AND also the new object in main() is also Eligible after the method returns
[ December 23, 2008: Message edited by: James Tharakan ]

posted 13 years ago
geeta vemula , you have to upload you image in the net and provied the link using URL tag.
You can use flickr

geeta vemula
Ranch Hand
Posts: 208
posted 13 years ago
so its because the method returns or island of isolation?
Erez Pitchon
Greenhorn
Posts: 13
posted 13 years ago
The question is: Which object is "not" eligible
As James said, when m1 returns, all objects created in m1 "are" eligible. Moreover, the object created from main to invoke m1 on will also be eligable at this point because it was not assigned to a reference. As such, the main thread can't get to any object, hence "all" are eligible.

So the answer to which object is "not eligible" at this point, is ... none, because they all are eligible.

Originally posted by geeta vemula:
so its because the method returns or island of isolation?

Its because of method returning.

Punit Singh
Ranch Hand
Posts: 952
posted 13 years ago
Here I tried to make the diagram for this example...
Here stack and heap are shown in short. 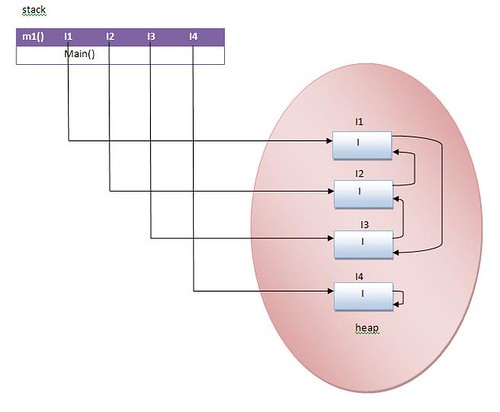 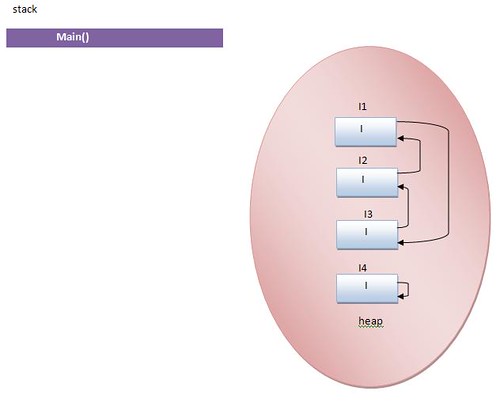 geeta vemula
Ranch Hand
Posts: 208
posted 13 years ago
wowww punit.. great job.. now my doubt is cleared entirely.. How did you draw this( i mean which editor)??

Thanks punit and james for clearing my doubt.

since this is a method, i am confused...

please clear this too..

posted 13 years ago
@James
@Ankit, you have also mentioned in one of your past posts/threads.

What is flickr? Is it a tool for uml modeling? If it is an open source product, then provide the url, please. I will appreciate it.

I am sorry as this question doesn't pertain to the subject of this thread.

Punit Singh
Ranch Hand
Posts: 952
posted 13 years ago
Arun for methods object references are stored with methods on the stack, but actual object are stored in heap, that is referred by references from the stack. I have shown this on the first diagram, see it closely.

I have shown I1, I2, I3, I4 references on the stack frame while Actual Objects are shown on the heap segment.

There is nothing new here Arun.

I class has reference of itself so it can store another I in itself, as shown in first diagram every block has an I reference to refer an object of I.so i1.i will refer to an object referred by i3 reference.
like: i1.i=i3.

same way i2.i will refer to the same object that is referred by i1 reference
like: i2.i=i1;

The only difference is that here objects are created in the method, so they are local/automatic object, that's why their reference will be stored in the method on the stack.

Only difference is the location of references.

Originally posted by nav katoch:
@James
@Ankit, you have also mentioned in one of your past posts/threads.

What is flickr? Is it a tool for uml modeling? If it is an open source product, then provide the url, please. I will appreciate it.

I am sorry as this question doesn't pertain to the subject of this thread.

Naveen flickr is a photo sharing website, its url is flickr.com, just upload your images there, take the url of your images and add them with image tag while posting. I have done the same thing.

posted 13 years ago
Thanks a lot Punit.