Sumeet H Singh
Greenhorn
Posts: 29
posted 7 years ago
Hi all,
Had a doubt regarding the spring AOP or rather AOP in general.
If I have a class having 2 methods - MethodA() and MethodB().
Before advice is applied to MethodA() so that another method(lets say MethodC()) is called before it. This works fine if you instantiate the class through ApplicationContext and call MethodA() on that instance.

Would that method be called if we call methodA() from MethodB() directly(as in, a java method call), considering that MethodB() is called on an instance instantiated through Spring's ApplicationContext??

Its not getting called..

Please clarify whether its correct as per AOP's rules or not.

posted 7 years ago
Moving to the AOP forum.

posted 7 years ago
See this thread.

At the bottom I explain how you can configure Maven to use compile time weaving to allow for self calls without the need of the proxy.


I now have a doubt in the transaction management related to this.
The transaction propagation rules are used for specifying how a method would behave if it is called from another method which is/is not running within a transaction.


How to make sure that the transaction advice defined for method-B() (which is specified through AOP code written below) gets executed if it gets called through method-A() as displayed in the figure? 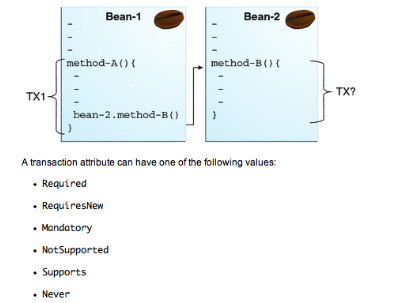