Arnab Patra
Greenhorn
Posts: 1
posted 7 years ago
For Last couple of days i have been trying spring 4 websocket .I am using apache-tomcat-8 and this is not a maven project. But There is a problem.
Here are my snippets

But in browser console its giving the following output

why its losing connection ?
Libraries.jpg 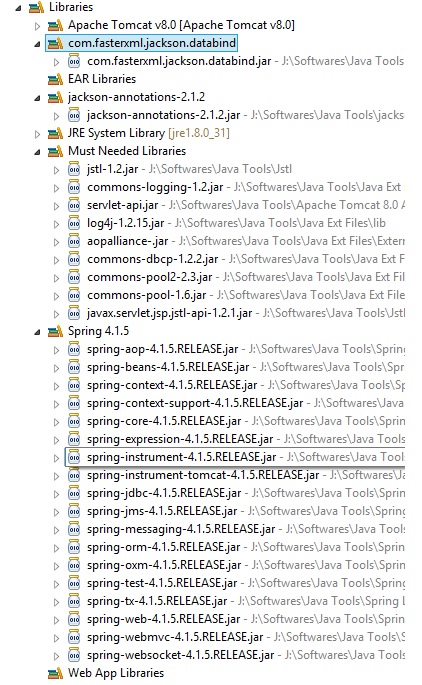 posted 7 years ago
I'm no web socket expert.
But I tried googling and found this. May be this will help solve your issue.
Also check the accepted answer here.

If you are not laughing at yourself, then you just didn't get the joke.

Rickson Menezes
Greenhorn
Posts: 1
posted 2 years ago
It's because of the issue of /info=34424 - with 404 error...whoops lost connections - that I had to abandon using the xml approach suggested at other places. I have Spring 4.2 in my project and many SockJS Stomp implementations usually work well with Spring Boot implementations. This implementation from Baeldung worked(for me without changing from Spring 4.2 to 5). After Using the dependencies mentioned in his blog, it still gave me ClassNotFoundError. I added the below dependency to fix it.