Again, the Encapsulation, plus Immutability

posted 3 years ago
Hello everyone

Although there is already a topic discussing this mock exam question here, I would like to bring up this subject again.

I just finished the first mock exam of Sybex online tool (from the study guide by Jeanne and Scott), and there is something that let me thoughtful.
Well, apparently for encapsulation, the setter method isn't required. Ok, after I finished the test and thought about my mistake, I remembered the main definition of encapsulation: the instance variables can't be directly accessed. Without a setter doesn't mean that the variable won't be accessible anymore. But it is a little confusing, because I always consider encapsulation as a private instance variable with public getter/setter, because it is often used for this purpose.
The book keeps mentioning the public getter and setter for encapsulation, so when I face a question like this one, I let these rules exceptions escape from my control. What I understand now is, for encapsulation, a setter method isn't required, is that right? 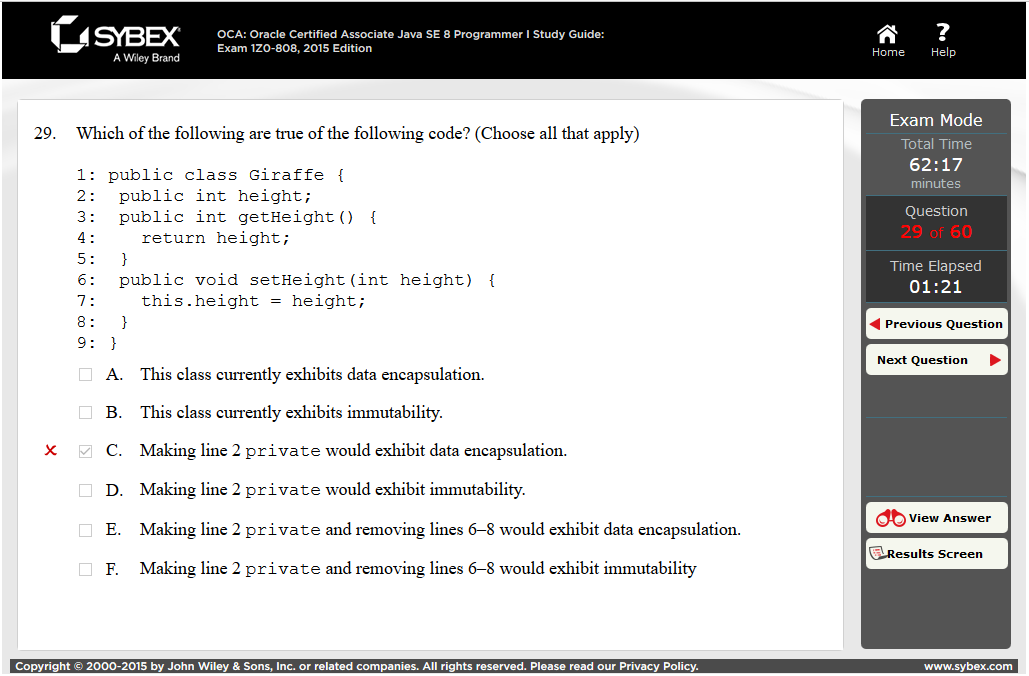 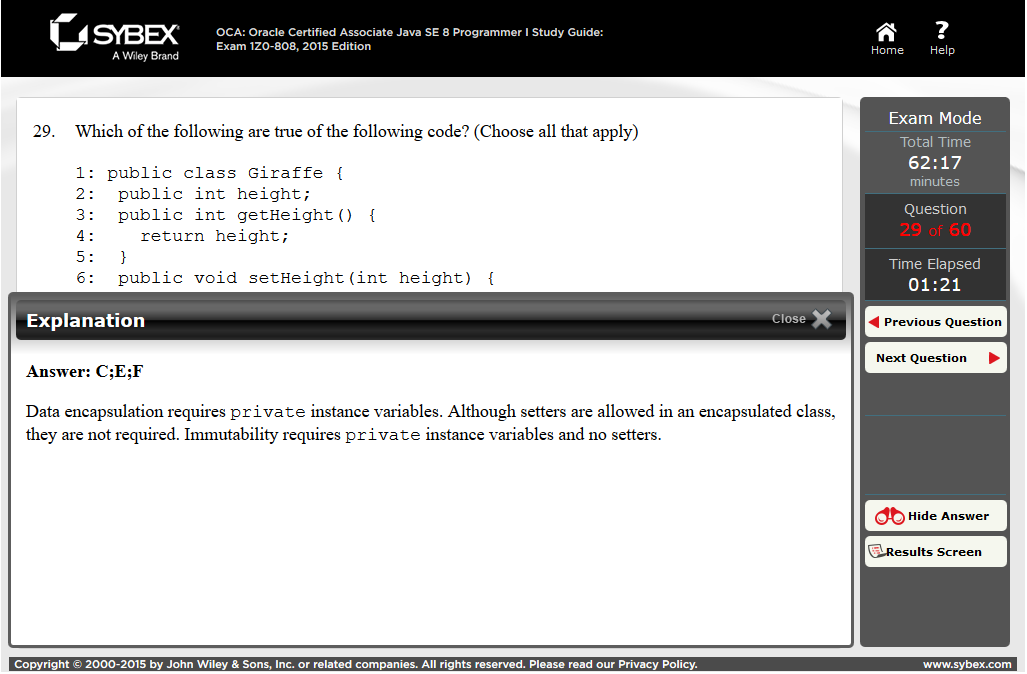 posted 3 years ago
Question and provided answers and explanations are right.


João Victor Gomes wrote:... the instance variables can't be directly accessed.
What I understand now is, for encapsulation, a setter method isn't required, is that right?


That is right. Once instance variable is private, it cannot be accessed through object's reference variable directly and changed value for instance. For accessing variable you need to use public class's methods, getter or setter - one gives you a value, another let's you set a value.

Now, what is important about setter to know. With a setter you can control what value user can set. For instance 'age'. You might don't want nobody to let set value as -4. So in a setter method you can control that it never happens. Well encapsulated class never has its instance fields public.

Setter as you mentioned isn't mandatory. Setter lets mutate object's state. So, in order for the class to be immutable, setter shouldn't be provided. Assigning value once during object's instantiation isni't considered as mutability.

Object is immutable once he got state set (during objects creation, pressumably via its constructor) and it never change anymore. But that doesn't mean, that you cannot have multible objects with difference states. That means that particular object cannot mutate from its initial state.

posted 3 years ago
Thanks Liutauras

So, I can assume that for immutability, the default value of an instance variable may be considered? Since in this question of the mock exam, the alternative F mentions making line 2 private and removing the setter method, but it doesn't mention creating a constructor to initialize the values. For immutability, I'm under no obligation to create a constructor with arguments?

This class is immutable, but is not encapsulated

This class is immutable, but is not encapsulated

But can I consider a class without a contructor with arguments as immutable? I mean, the question says that making line 2 private and removing lines 6-8 would exhibit immutability, but there is no constructor with arguments to initialize the values.
Thus, I can assume that a class object can be immutable even without a constructor to initialize the values, since immutability means that an object of a class can't have its values changed, just initialized, and the values of an object (instance variables) will always be initialized (by the programmer, or by the JVM, with default values).


If you make line 2 private and remove lines 6-8, you can't change the value of the (instance) variable height and the variable keeps its (default) value forever and ever. So yes, although not very useful, that's an immutable class.