I have experimented with how to create topics with kafka-console-procer.sh and kafka-console-consumer.sh tools. It is intended to run with zookeeper tool.
For the Figure 1.15, I have created five (5) set of topics in which each represented with its own category of records. I used the command line output as show in below attachment file.


I used simple logic using Java by developing Producer and Consumer classes. So it can be used to create a topic and messages. Then it gets queued up into message queuing system.
What I would clarify here is about the “paritions”, whether it is 1, or more. If it is more number of partitions allocated in it, then messages are not read by consumer in sequential order, but it is read as random.

N-clustered servers are located and accessed with broker logic in a single computer.

Question is, “Do we need to use an offset of a partition in order to identify in N-clustered servers? 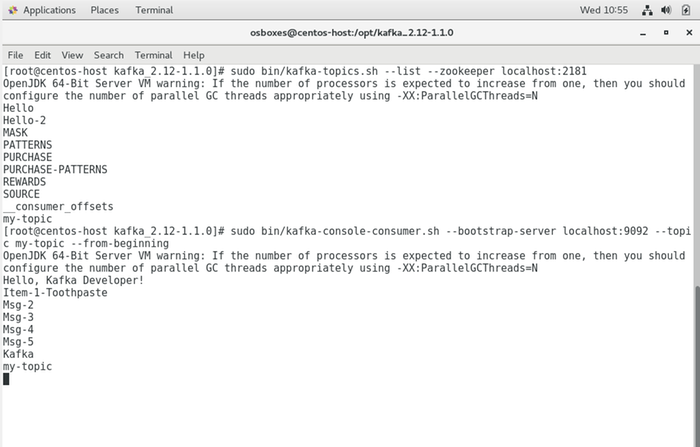 If I understand your question, when using more than 1 partition in a topic, records are read in-order in a partition, but the order of records is not guaranteed across partitions.

You don't need to worry about using offsets in a multi-node Kafka cluster, the offsets are only used by the consumer when re-connecting so it can pick up where it left off.

Thank you for your answer.