Crop circles, but small ones

Posts: 69426
276
posted 2 years ago
The pictured “crop circle” has been in our garden for about three weeks. It is hardly the largest crop circle ever seen, being slightly under 2′ (600mm) in its largest dimension.
The plans include Dicentra on the right, ivy (Hedera helix), winter aconite (Eranthis hyemalis with the start‑shaped leaves), lesser celandine (Ranunculus ficaria with the heart‑shaped leaes) and one wallflower (Iberis). But the plants aren't the real reason for the crop circle. Ruth has her own idea about how they got trampled down, and I think she is correct.

Any guesses at the explanation?
CropCircle2.JPG 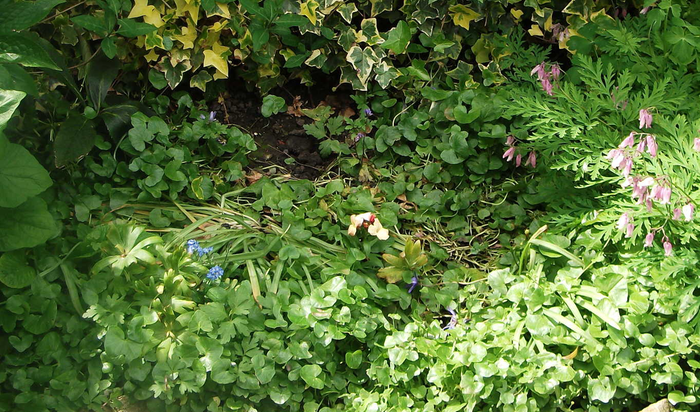 Slightly more seriously, the first thing that came to mind was a cat or something maybe a tad larger has taken a liking to that spot.
Liutauras Vilda
Sheriff


You decided to go through the backyard so the Ruth wouldn't notice you came back late, but then it was dark, and you obviously came back home not from the literary reader's evening?

Posts: 69426
276
posted 2 years ago
Another hint; this photo was actually taken at the end of last Summer. I was off to go angelling and as I went out, I saw something go the other way through the door, so I called Ruth to bring a camera. The culprit was too hot to handle a prickly customer; we had to wear gloves to handle it. Unlike most wildlife, they don't run away. It had been hiding amongst cobwebs, which it presumably wiped off a few minutes after the photo was taken. 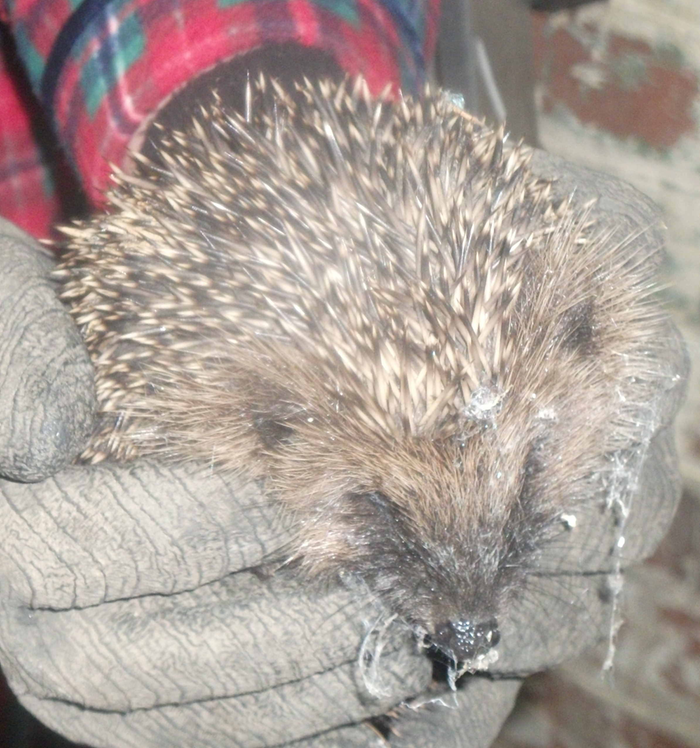 Posts: 69426
276
posted 2 years ago
Hedgehog courtship is something I first stumbled across forty years ago. They walk round and round each other (I think the male does most of the walking and the female stays in the centre) in tight circles, the (?)male sniffing loudly. Ruth said there had been some heavy breathing in the back garden (about 3 weeks ago) the last night and there was now a crop circle. She didn't watch. Obviously the crop circle is caused by their circling each other. We haven't seen any tiny hedgehogs yet; maybe it is too early for them to be mobile.
The hedgehog in the photo wasn't full‑grown. If it has survived the winter, it will be full size now.

posted 2 years ago
Nothing like that around here.  Is that a hedgehog?

Edit: I should have waited a few more seconds before asking.
Liutauras Vilda
Sheriff

posted 2 years ago
Agh, so cute!

Aren’t they common in England? What the foxes do?

We heard the “heavy breathing” again about 20 minutes ago, but they are not showing their faces. They seem quite predictable, appearing about 9 o'clock.

Aren’t they common in England?

Their population is about 25% of what it was in 1970. Shortly after taking that photo back in August, we organised a visit from one of the grandkids who sat watching the hedgehog eat the food Ruth put out for it. We also had a visit from our brother‑in‑law, about the same time, who confessed to never having seen a hedgehog before. He was quite excited when we visited him about two weeks ago and Ruth identified some squidgy muck on his drive as having come our of the rear end of a hedgehog.

There are quite a few round here; I saw one last summer apparently waiting for a bus. Well, it was at the bus stop. I presume it had learnt that on a wet summery evening slugs and snails crawl out of gardens onto the pavement where they are easier to catch.

What the foxes do?

Ignore them. There are very few animals which attack hedgehogs. I have heard that badgers will, though.

Dave Tolls
Rancher
Posts: 4577
47
posted 2 years ago
Glad you mentioned the cobwebs, because the little chap looks like he had a rather nasty sneeze in that photo.
Campbell Ritchie
Marshal

Posts: 69426
276
posted 2 years ago
They have got smaller; Ruth saw three of them last night about 5″ (130mm) long. I only saw two of the little ones, but did see a full‑size version which Ruth missed.