We'll be selecting four random posters in this forum to win a free copy of the book provided by the publisher, Apress. 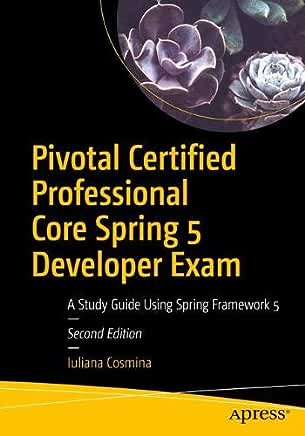 Geff Chang
Ranch Hand
Posts: 54
1
posted 2 years ago
Hi Iuliana - Welcome! I'm very excited about your book, because I have a plan to get certified in Spring 5 next year!

I hope you have lots of interesting questions.

Henry Wong wrote:
This week, we're delighted to have Iuliana Cosmina helping to answer questions about the new book thor. Questions posted in this topic are subject to removal.[/b]

posted 2 years ago
Thank you all.

I hope I can answer you all.

posted 2 years ago
Thank you!

I hope you will enjoy learning from it  as much as I enjoyed writing it, and you will find it useful in your career growth as a software professional!

Tanmoy DattaGupta
Greenhorn
Posts: 1
posted 2 years ago
Hello Iuliana, Thanks for adding another book in Spring family. As usual my expectation is quite high on this Book. Just wanted to know  Spring Professional Certification Topics change on May-2019 and it's changing each year.
Hope you are covering all the topics in detail. It's going to harder and harder day by day to clear the exam. Hope new book will help a lot.
Shaik Ashish
Ranch Hand
Posts: 41
I like...

posted 2 years ago
Hello Iuliana ,
Welcome in. I am very much excited to learn Spring and get my queries Cleared. Looking forward

for it.
Campbell Ritchie
Marshal

Please ask your question elsewhere; remember your post may be deleted in whole or in part.

Following a course into the world of programming since May.
Next week we're starting with Spring #excited!

I hope to get get certified asap and I'm filled with tons of questions!

Friendly greetings and be welcome!

You will probably love Spring.

And good luck with the certification exam!

Please ask a question about the book in another thre‍ad to stand a chance of winning it.

I am thinking of postponing my exam just for this book. Read Pro Spring 5 by Iuliana and I must say it's a master piece, everyone (who wants to learn Spring the right way) should read it at least once.

I have bought your certifiation book in Dec and received in mid January. It is at work and now due to COVID-19 since last 2 month i am unable to go to work and what message i am getting is that may be another 2 to more months i will not able to go to my work place.

Is there a way i can get some pdf version so i can read on my lpatop. I had already paid for my paper book?

Its a kind request. If possible please consider. I can send you my email so you can send me the pdf file.

Posts: 74687
335
posted 1 year ago
I suggest you contact the publisher directly; you might get a faster response like that. Also please contact work and see whether there is any way to retrieve your book.

Ritchie is right, contact Apress, provide a proof of your purchase and you will probably get an e-book.

I am here yet again to answer questions about Spring and about my book.
I am blessed to still have a full time job, so please be understanding if I do not answer right away.

The promotion comes in time

So I have 2 questions concerning your book:
- Does it cover spring cloud ?
- What you think of microservices in java programming world, Will it be the futur or it's just a fading trend like others ?

Chapter 11 covers how to design applications as a set of microservices using Spring Cloud and Spring Boot. So, a little bit, yes.

Microservices are here to stay for as long as cloud providers do.  Microservices in Java have a future as well, because the Java language is quite a resilient one as well.  ;)

Wow, I am amazed anybody actually wants to know about the process.

For the test questions, I followed the official study guide and just picked topics that were important. All the answers are either in the official reference documentation or the JavaDoc. My technical reviewer is a Spring Technical trainer and he sometimes gives me hints about the things that are important for the certification exam. But he has to be very careful, because we do not want to be accused of plagiarism or of breaking the confidential agreement I signed when I took the exam and he signed when he became a trainer.

It took me about 9 months to write the second edition. I worked on it every day from 9 pm to about 1am, sometimes even 3 or 4pm from January until end of September. Of course, sometimes during the weekend I managed to do about 12 hours.
The speed of the industry puts a lot of pressure. A technical book has to be released before the technology changes to different version and the book ends up being irrelevant. So you can have it fast, but it won't be pristine. There is one technical reviewer and two teams of reviewers checking grammar and formatting, but mistakes still escape us, since we all have day jobs that pay the bills.

Thank you for buying my books. And keep your eyes on the Github repo, because that is where the errata is and I do my best to maintain it.
Cheers!
Michael Kiser
Greenhorn
Posts: 1
posted 1 year ago
Hi... looking forward to reading your book.   Started working with Spring and microservices recently so definitely looking to learn more.

Thanks for sharing your insights.
Campbell Ritchie
Marshal

I'm starting to dive in the Spring framework and it's really interesting, and I'd like to ask you the following questions:

-What is the best way to use your book for beginners like me?
-What subject should I focus when learning Spring in your book?

Thank you for your comments!!!

I work @ Red Hat, Inc. but opinions are my own.

The book is designed to help you learn Spring as a beginner: what its cores concepts are, how to debug it and how to use it efficiently. Just traverse the chapters in order, feel free to skip over the XML configuration parts and work with the code. I am a very practice oriented person. I can read a lot of info, but if I do not see it applied, I tend to forget it or not really feel confident in my knowledge. That is why there is so much working code coming with the book. Because being a technical  book, people will have the tendency to jump over the text fast and get to the code, that is why the code quality must be high.

I know nowadays we are used to getting everything fast, but mastery takes time. I sometimes hear people in the industry saying "Spring just works", "Spring automagically inject a dependency" or Spring does its "voodoo" and I get sad a little. There is so much happening under the hood of a Spring application, there is so much beauty in how things connect to one another, it just feels unfair to call it "magic".  So when learning Spring don't think in "subjects" just aim to understand how it works and never to have have to use terms like "magic" in a technical environment.

Thomas Buell
Greenhorn
Posts: 8
posted 1 year ago
Does the Spring certification include Spring Boot?
iuliana cosmina
Author
Posts: 56
15
I like...

posted 1 year ago
Yes.
Thomas Buell
Greenhorn
Posts: 8
posted 1 year ago
I am interested in the book and I hope to get certified. Spring is great in reducing the amount of code that needs to be written,