Mike Savvy
Ranch Hand
Posts: 102
2
posted 3 months ago
Just got this E-Mail, cant go to my exam this Thursday..
pearsonvue.png 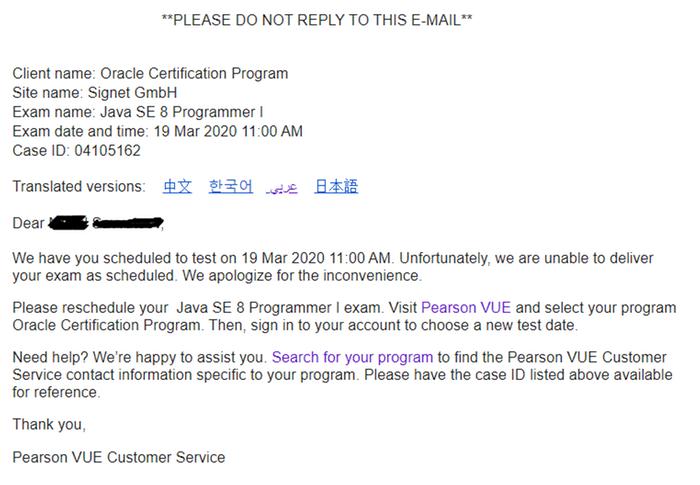 Posts: 69472
277
posted 3 months ago
Does that apply everywhere? Does that mean the exam centres are closed on that day, or until everybody has had Coronavirus?

Mike Savvy
Ranch Hand
Posts: 102
2
posted 3 months ago
I do not know, but here in Germany all testing centres (and almost all other things except supermarkts, pharmacies and restaurants) are already closed.
I think for first time until 20 April, later they (government) may extend the time again or may not, depends on corona situation.
The idea behind it that there is a luck in medicine which cant care for very much people at the same time, so they want to slow growth, so that every patient earlier or later has chance to become needed medical treatment

Mike Savvy
Ranch Hand
Posts: 102
2
posted 3 months ago
I called Pearson and they cancelled my exam, now I have my voucher again valid and can shedule new exam when this pandemic ends.
This decision about close all test centres is not from Pearson but from government. So maybe in other countries it is still possible to take exam

posted 3 months ago
Thank you for posting this thread. I've added a link to it from many of our cert forums.