MySQL returning empty set with data in the table

I have encountered an issue where I imported a csv file (they provided it) and I can successfully execute my queries unless the WHERE clause has a specific column name (Reason).
I have reached out to my instructor, but his turn around time on replies is often not until the next day. I have been searching for a fix, but so far have been unsuccessful.
I will try to duplicate my code below, The screenshot shows a description of the table as well as an example of the data that I imported.


This is what I cannot get to work. It returns an empty set.

I have even tried...

The result is an empty set!

My instructor suggested that I may have an unexpected carriage return at the end, so he suggested I try LIKE instead of =

This also returned an empty set.

If I enter any other column (RMAID, OrderID, Step,  or Status) in the WHERE clause everything works fine.
I can search for specific strings or integers as needed and get a proper return.

This is the code I used to import the csv file...
I have also tried it without the IGNORE statement with the same results

The nature of the assignment doesn't call for any scripting, as this is basic stuff. I have done a small amount of scripting with python, java, and Linux, but
I am by no means proficient at it. 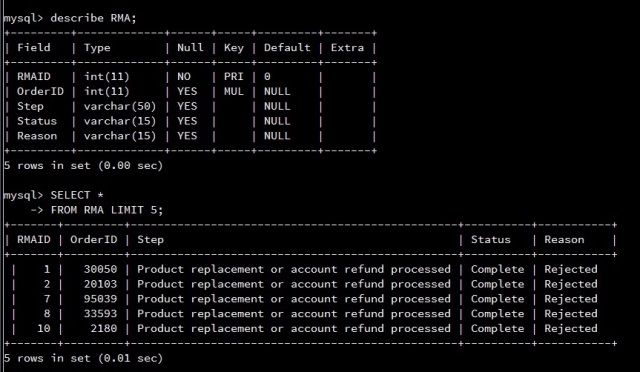 
and see what you get.

posted 1 month ago
If that was a DOS file, lines would actually be terminated by "\r\n", not "\n" like Linux/MacOS. And the lack of a bar on the righthand side of your data display hints at that.

Check the MySQL docs to see what they have for that situation.

Bill Platt
Ranch Hand
Posts: 42
1
posted 1 month ago
Thanks everyone!

The short answer is that I'm an idiot. I had the wrong search string in my WHERE statement.

I was using 'Restricted%' instead of 'Rejected%'

Sorry it took so long to get back, I've been working crazy hours lately.

Bill Platt wrote:The short answer is that I'm an idiot. I had the wrong search string in my WHERE statement.

posted 1 month ago
Actually that's a dirty load. End-of-line characters have no business in your database. They not only make searching a mess, they're a wasted (albeit a small one) of space.