This is my first REST Api in java for which I followed the tutorial on youtube: (https://www.youtube.com/watch?v=5jQSat1cKMo) exactly. However I cannot get the url to work in eclipse and get the following error message: (see attached image also)

HTTP Status 404 – Not Found
Type Status Report
Message Not Found
Description The origin server did not find a current representation for the target resource or is not willing to disclose that one exists.
Apache Tomcat/8.5.13

I have uploaded my src and web xml files.

Can you help me discover what I am doing incorrectly.

Any help in this matter is appreciated.

I followed the tutorial which specifies that the service can be run by 'Run on server' in Eclipse. I did not deply anything to the tomcat webapps directory. Attached you will find the tomcat directory structure image. Let me know how to proceed. 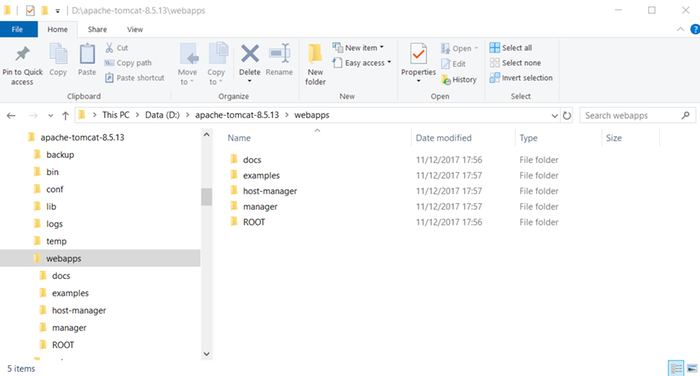 Dave Tolls
Master Rancher
Posts: 4710
49
posted 1 month ago
Well, looks to me like that's not deployed anything to that tomcat server.

I don't rely on an IDE to do any deployments, as I have always found them to be a little flaky.
So I can't help with that.
If you want to run it up outside of Eclipse then you need to place a WAR file into the webapps directory.
Tim Holloway
Saloon Keeper

Historically, there have been 2 ways of running webapps in Eclipse. One came with the JEE spin of Eclipse and it was abominable. The other was a third-party plugin most recently known as "mongrel", although I haven't looked lately. I preferred mongrel because it allowed a cleaner mode of operation. The JEE builtin did rather horrible things to the WAR when it deployed.

Regardless, the key in either case is that your application be properly structured and properly made known to Tomcat, since Tomcat does the actual deployment regardless. The simplest and most popular way to publiish a webapp to Tomcat is to simply copy a WAR file into the TOMCAT_HOME/webapps directory.

Once a group of people sold their souls to the Devil to fight a Great Evil.

And they congratulated themselves, for they had employed a Flawed Vessel to Do Good.

But the Devil laughed. And he employed them to do evil many times and in many ways, Far more evil than that which they had thought to defeat. And though they counted themselves righteous, he now owned their souls.

Thanks for your help. I deployed to the webapps folder for Tomcat having changed the webxml to correct the url, and it worked I got my first resource message. I will continue with the example.

thanks to Dave as well.