No library found for the http://richfaces.org/rich namespace

Cezar Apulchro
Ranch Hand
Posts: 303
3
posted 3 months ago
I'm initiating in JSF and I created a xhtml to test, in this test I am trying to using richfaces but I gaining this  error when define the xmlns.
My environment:
. Netbeans 8.2
. Maven
. JSF 2.0
. RichFaces 4.5
My JSF:

posted 3 months ago
There are several odd things here.

First a note related to your original thread. I'm not sure that RichFaces 3 works any more. That is, in modern browsers. If I have my version numbers correct, that's when they made major changes to the tags and functions of RichFaces which required extensive rewrites. I still haven't forgiven them for "doing a Microsoft" on backwards compatibility, in fact. The most important thing, though, is that even if you converted, RichFaces 3 doesn't support most recent versions of Internet Explorer because IE was doing a non-standard implementation of a critical JavaScript function. That incompatibility often results in a blank page being displayed.

You have taglibs defined in your View Template. JSF Version 2 View Templates are not JSPs (unlike JSF 1), and JSP directives should not be used in them. They're not processed the same way JSPs are. Besides, you don't need them as long as you have defined the XML namespaces for the JSF tags.

You're using both PrimeFaces and RichFaces in the same app. I'm not sure if that's possible or not, since they provide similar-but-not-identical services.

And finally, I don't know that that "endorsed" thing is in your POM, but I'm not sure its good Maven practice.

Cezar Apulchro
Ranch Hand
Posts: 303
3
posted 3 months ago
I have removed all references to Primefaces and I'm using Richfaces 4. My Richfaces now is 4.6. Now I receiving error when I build the project "The POM for javax.servlet.jsp.jstl:jstl:jar:1.2 is missing, no dependency information available". I can't understand why this because this entries are in the  pom.
My pom: 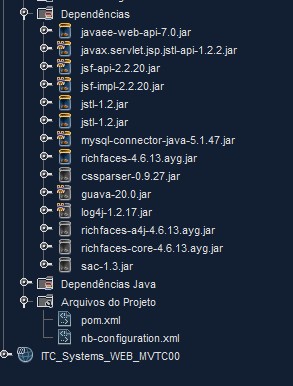 posted 3 months ago
You appear to be attempting to pull in jstl from more than one source.

Actually, when I did some checking, the newest reference to jstl.jar I can find dates to 2011. I don't think any of these POM dependencies should be used. As of at least Tomcat 7, the JSTL taglib implementations were located in the JaSPer JSP compiler library and therefore should be available as server-provided classes. Also, I repeat: delete the @taglib directives. They have no place in a JSF View Template. The  xmlns namespace directives are sufficient.

I should also note that it really is bad practice to use JSTL on a JSF View Template at all. I don't know of anything that JSTL does that JSF doesn't do better, and JSF's JSTL equivalents know what's going on inside JSF, which JSTL doesn/

Cezar Apulchro
Ranch Hand
Posts: 303
3
posted 3 months ago
Now I understand and I removed the taglibs and jstl from dependencies and this problem was resolved but I receiving new error.  I will close this contact and open new contact for this new error.
Very very good, congratulatios.
Thanks and best regards.