James Zimmermon
Greenhorn
Posts: 5
posted 9 months ago
I have just started learning the apache commons libraries, and specifically, today I wanted to write a simple program that sends an email from myself to myself, using classes and functions found in org.apache.commons.mail. Unfortunately, when I execute the program, regardless of weather I'm using port 465 or 587, I continue to get the following error:

Thanks in advance for any help in this, and my apologies for any digital faux-pas or whatnot.
Here is the relevant block of code:

posted 9 months ago
Knowing that it failed is only the first step in your journey. The next step is to find out why it failed -- there could be many different reasons. And to find that out, it would help to see the stack trace for the exception.

If you have that, then do post it here for people to examine. If you don't, then you need to modify your code to produce a stack trace. (In fact your code should always be written so the stack trace is available for this kind of research.)

Matthew Bendford
Master Rancher
Posts: 180
5
posted 9 months ago
sorry for the wall of text - I've wrote it rather drunk and just wrote down anything that came into my mind as I wrote it - to any mods: feel free to cut it down

Well, at least if you're using the code as posted there's one major issue I (as someone manging his own mail server since early 2015) spots instant: you try to use some @yahoo.com profile to send from some @gmail.com mail - this doesn't work for a couple of reasons:

3) although I have lots of experience running my own mail server and using the JavaMail API, I never was a fan of apache commons - as, although they have quite a large library of common used funcationality it always require to get the whole lib involved - don't get me wrong, I'm not against using libs and (re-)use codes proven to work - but it's just a personal choice as I don't like it to use in that way

4) as already mentioned: no matter if you use some logging or just plain "print to console", but at least in my personal opinion every catch-block should contain a call to printStackTrace() somewhere - as it can be not just helpful but required to firgure out what actually went wrong and caused the exception in the first place
sure, when dealing with GUI it often throws some nonesense NullPointerException of the EDT maybe hard to trace from where it really was called in the first place - but it at least gives you some hint where to start search instead of just "there was some unknown issue while completing that action"

5) in addition to all that, as someone taking care of his own mailserver, I know that just "sending an email from within some lines of java" can get you at least the same sort and amount of headaches as try to use PHPs mail() function
just as an example: I recently cleanly installed my root serer with the recent version of the distribution I use (opensuse leap 15.2) - and as I juse apache James as my mailserver I have set up sendmail as what's known as a "nullclient" to just pass any mail dropped in by an invocation of sendmail binary to my james to handle it - and as this was a clean setup I forgot to correctly set my hostname - which for whatever reason locked up sendmail in quite some delay which ended up in the simple mail() script in PHP to block for even longer - to track down that issue it require me to try what's apache doing from the terminal and to check the system logs to spot the line "hostname not set"
same could be true for your code: for what ever low-level reason it doesn't work the way as when you use thunderbird to send a mail - this can require to get as low-level as to use wireshark to inspect the network packets

7) although nothin to do with your mail stuff - but with your GUI code: do NOT call time consuming taks from within the EDT - have a look at https://coderanch.com/t/738589/java/measure-writer-progress-JProgressBar for why not to do what you'Re doing and how to do it better

James Zimmermon wrote:... when I execute the program, regardless of weather I'm using port 465 or 587, I continue to get the following error ...


I don't think there is any problem with the code - I ran the code after changing the mail server and credentials and the message did get delivered. 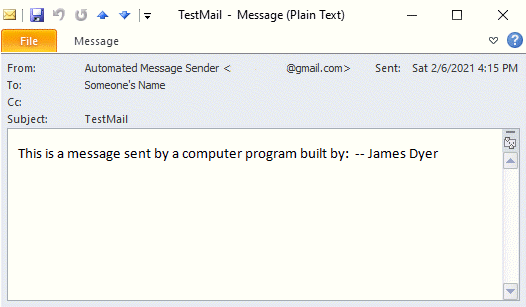 The problem that you are probably seeing is that Yahoo is blocking your app from sending mail for security reasons.  I know with Google (what I tested with), that the account needs to be specifically be configured for less secure app access to be able to send message from a third-party app like what you have.  Even if you do get it to work, you may find that your emails may get blocked by the receiving email domain or the recipient's email client because it may be deemed to be SPAM or look suspicious.