It's a sentence - see if you can figure it out.
Campbell Ritchie
Marshal

Posts: 74006
332
posted 6 months ago
I got to the third letter in the last word and gave up because I thought I could guess the remainder.

ronald deux
Ranch Hand
Posts: 209
1
posted 6 months ago
7? IT DõN? M
I have not finished translating

it's Braille
I went to Lexigolos Braille

No, it isn't. I am obviously older than you because I have used that sort of material in real life. It was yellow when I used it.

Posts: 4632
182
posted 6 months ago
It must have something to do with fishes, since it starts with 'cod'

posted 6 months ago
it's paper tape they used on computers in the...60's?  70's?  the little holes across the middle are for timing, if i recall.  it's how hte machine knows when to ready the next "byte" of information.

Posts: 13262
292
posted 6 months ago
Yeah, I figured it was a punch card after Campbell's comment and that each column was a 'word'.
Stephan van Hulst
Saloon Keeper

Posts: 13262
292
posted 6 months ago
Heh, after Piet's comment I could translate the rest of it without writing any code or using lookup tables.
Ron McLeod
Marshal

Campbell Ritchie wrote:... I am obviously older than you because I have used that sort of material in real life. It was yellow when I used it. 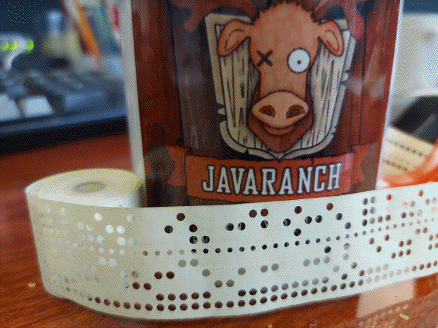 There's something fishy there, as you said. You think it is cod Latin?

I don't think those are columns; they are transverse to the tape, so I think there are rows with one character each.

Posts: 74006
332
posted 6 months ago
There was a reader on the left side of the terminal (a dreadfully noisy thing called a Teletype, but there were doubtless other kinds of terminal). I put the tape in the reader, closed the transparent plastic clip, and away it went. The tiny holes were gripped by a toothed wheel and away it went reading a few hundred chacters  MINUTE. i can't remember whether there were tiny feelers which went through the holes or photocells; I think feelers. This was fifty years ago. There was also a punch to perforate the tape, and a little winder with a crank like a hand operated desktop centrifuge to wind the tape into neat little rolls. You could push ctrl‑shift‑P‑repeat and get completely blank tape at the end of the reel, which looked much better.

Posts: 74006
332
posted 6 months ago
Both tapes as shown have the No 6 bit at the bottom and the No 0 bit uppermost. They are simple ASCII with each hole representing a 1. It is one of the few obsolete types of digital record that can still be read without the appropriate hardware, even if such reading is very time‑consuming.
Link to photo of a similar machine at Wikipedia. It seemed to use 8‑hole tape, I think we had 5+3 rows of holes and the drive wheel was off‑centre. That made it impossible to feed the tape upside down. But backwards would have been possible.

posted 6 months ago
This is a ASR-33 (photo I took while at the Seattle Computer Museum a few years back) with the punch/read that Campbell described. 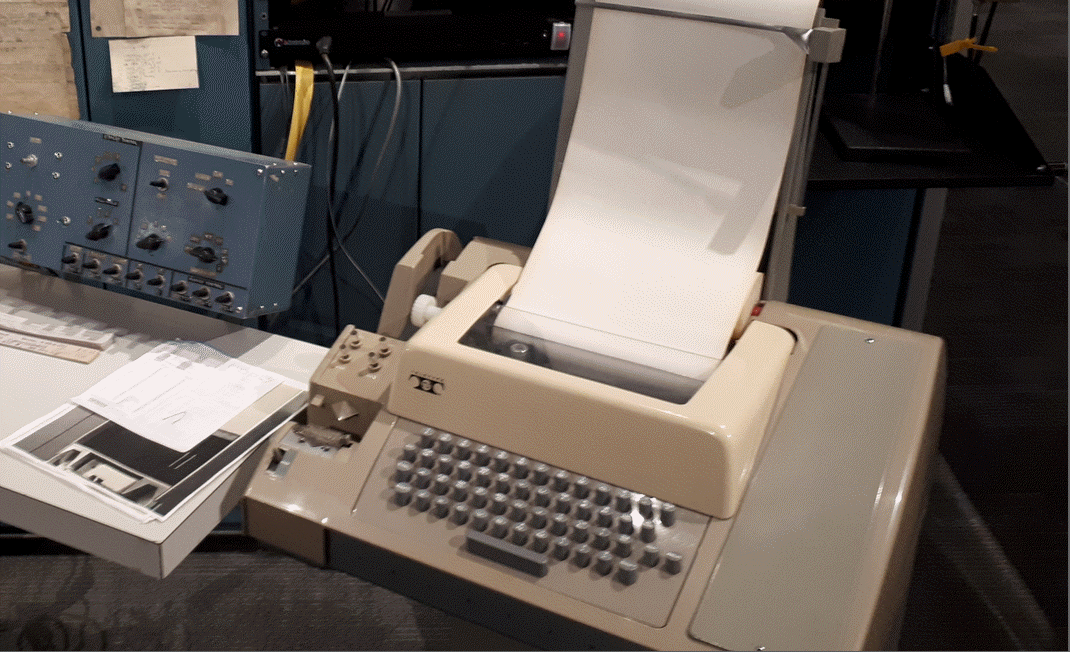 There's something fishy there, as you said. You think it is cod Latin?

No, that wouldn't fit. Seriously, I don't know what cod Latin is! Is that the latin name?

Anyway, I remember the first (and only) time I encountered punched tapes. Was it the late 70's or the early 80's? We did not have computers at that time. I had written some report and headoffice in Zurich asked me to send it by telex. Never seen such a machine, but I went to the lady who operated that thing. She started typing, until we discovered a typo. A long tape full of holes came out, and somehow she could locate the typo. Not sure what she did then, but a bit later she went on typing from the position of the typo. Unril we found the next typo.

Well, it took a few hours and I remember when going home asking myself whether I was impressed by this piece of technology. Sure, it was a lot faster than snail mail, but what a clumsy way of doing.

posted 6 months ago
Heck, if that's what you want, I've got a whole thick roll of the stuff in one of my punched-card boxes. Complete source code for the Star Trek game - a fantastic way to consume rolls of paper before we got our first ASCII CRTs.

Some fun facts about TeleType™ machines. The TeleType corporation was headquartered in Skokie Illinois, just outside Chicago. The original machines used 5-bit Baudot code and were popular with amateur radio operators (hams)  - WW2 surplus, I think. You got something like 75 baud out of them.

By 1972, there were 2 primary models running ASCII. The ASR-33 had the paper tape reader/punch, the KSR-33 did not. The "33" probably refers to 330 baud data transmission. That blank panel on the righthand side of Ron's picture could be populated with a dial-up telephone handset. I don't recall the reader/punch unit on our school model being quite as complex looking, and I THINK it was on the right-hand side for us, but it has been a LOOONG time since then. Teletype also ran 110 baud models, I believe, and maybe even something slower than 75 baud on the really old baudot machines, but I'd have to consult history books about that.

Teletypes were also popular as system terminal devices for pre-IBM PCs running OS's like CP/M, as well as for many mini-computers like ours. The reason that CP/M, DOS, and Windows are afflicted with CR/LF line endings in text files comes from the fact that TTYs were dumb devices and had to receive separate carriage and paper motion commands. Unix took the hint and put that sort of stuff in termcaps, so you don't see it there.

There were also Receive-only models, popular in newspaper newsrooms where news would come "off the wire". The term "Wire services" for providers like Reuters and the Associated Press was originally quite literal.

The TeleType keyboard had cylindrical keys that had considerable travel to them. They were "clicky" in that while some force was required to push them, once you passed the critical spot, they thunked down satisfyingly.

The print mechanism was a cylindrical type head that hammered against a generic typewriter-style ribbon. It spun around and was raised and lowered to bring the desired character into position for typing. A similar approach was used on the IBM Selectric typewriters, except that instead of a cylinder, they had a tiltable "golf ball" element and that allowed more characters on the type element. Teletypes, in contrast, did not have enough room to manage both upper and lower case on one element. If lower-case elements were sold, I never saw any.

The electronics operated via 20-milliamp current loop technology. Basically, you piped 20ma of current down a line and you interrupted it to indicate bits. Voltage was a bit flexible, since it was current that counted. If you interrupted the current loop (say, by turning off the computer), the Teletype would chatter.

Piet Souris wrote:Anyway, I remember the first (and only) time I encountered punched tapes. Was it the late 70's or the early 80's? We did not have computers at that time. I had written some report and headoffice in Zurich asked me to send it by telex. Never seen such a machine, but I went to the lady who operated that thing. She started typing, until we discovered a typo. A long tape full of holes came out, and somehow she could locate the typo. Not sure what she did then, but a bit later she went on typing from the position of the typo. Unril we found the next typo.

Well, it took a few hours and I remember when going home asking myself whether I was impressed by this piece of technology. Sure, it was a lot faster than snail mail, but what a clumsy way of doing.

Early 70's for me. The professor was a forward-looking type and he had a program on punched tape. Unfortunately he was standing on the tape when the reader started reading, so it could only read up to the place where the tape had been torn off. Naturally the program didn't get run and the rest of the hour was improvised.

posted 6 months ago
Yeah, that looks more like what I remember.

Speaking of legacy I//O, one of the things that thrilled me when I first started playing with Arduino devices was that there were 12 digital inputs on the Uno. Since it happens that the standard IBM Hollerith Card has 12 punch rows, the idea of building a reader sprang instantly to mind. After all, if I've got these old card decks, I might as well grab their data!

posted 6 months ago
Actually, Arduino+Lego punched-card reader was the thought. These days I can also 3D print for better fit if I need to.

What reminded me was a recent display of an 8mm movie film scanner/digitiser built with Lego and using AI on a Raspberry Pi to detect frame boundaries. Which surprised me, since 8mm film has sprocket holes that are supposed aid in that process.

I think people have even re-created parts of the Antikithera  Device using Lego. Then there was the machine that pulled in sheets of paper, folded them, and launched the resulting paper airplanes...

Posts: 74006
332
posted 6 months ago
I only went in for the old‑fashioned sort of Lego where are the bricks were the same shape.

posted 6 months ago
There's a fellow in Ireland who's spent the lockdown re-creating his favourite pubs in Lego using only standard commercially-available blocks.

I've got to admit that to me it's cheating when they do things like the Star Wars sets that have specialized bricks like laser rods, rocket engines and radar antennas. But gears, rods, and wheels with rubber tyres are really handy when you want to get kinetic.

I have an early Miindstorms set myself. Newer ones can be controlled wirelessly, but mine has a control mega-brick that's programmed with buttons.

Posts: 74006
332
posted 6 months ago
Well,...........pubs are just a posh form of house, and that is what the original Lego™ was designed to make. I gave the grandsons dirty great bags of second‑hand Lego™ for Christmas a few years ago. One Dad agreed with me that a random selection of bricks allows the child so much more space for his imagination.