What are all these yellow rectangles things that appeared in Eclipse IDE?

I noticed these yellow things that appeared in the project classes as per attached.

Now, after I left that job, I was taken off the company's collaboration tool - gitLab.

But, the yellow things seem to be stuck there for good.

Can anyone tell me how to get rid of the yellow things? 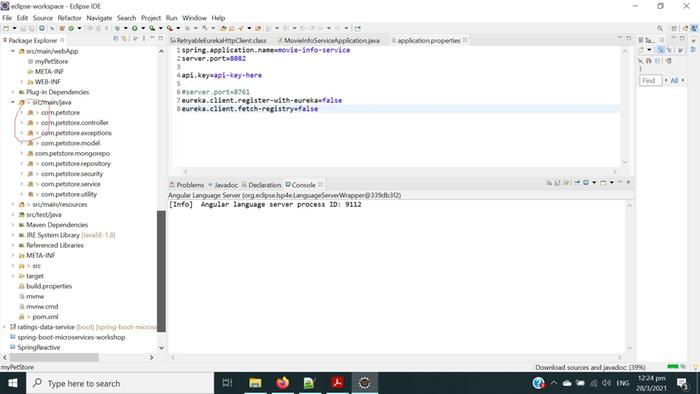 posted 3 weeks ago
Those yellow things indicate warnings.  You get rid of them by addressing the issues which they are highlighting.

To see a summary of the warnings (and errors, infos, etc.), go to Windows / Show View / Problems:

Ron McLeod wrote:Those yellow things indicate warnings.  You get rid of them by addressing the issues which they are highlighting.

To see a summary of the warnings (and errors, infos, etc.), go to Windows / Show View / Problems:

These are not warnings because I have similar yellow rectangles in another web app and that web app is confirmed running good and can compiled without any problem.

I noticed that if I did not clone anything from a repository where it is shared among team members I won't get to see those yellow rectangles.

Why are you saying rectangles? Why are you talking about old code from your previous employer?

Posts: 72479
315
posted 3 weeks ago
Warnings suggest possible errors; they often do not stop the program running.

Posts: 12825
279
posted 3 weeks ago
I think you are referring to the yellow cylinders. The cylinder is typically used as a symbol for a database, and in the context of a project explorer they usually denote uncommitted code changes.

The symbols will disappear when you commit or discard your code changes.

tangara goh
Ranch Hand
Posts: 736
posted 3 weeks ago
Yes Stephan.  My eyes are failing me.  As such, I thought they are rectangles.  Yes the yellow cylinders.

May I know is there anyway to make them go away?
Campbell Ritchie
Marshal

tangara goh
Ranch Hand
Posts: 736
posted 3 weeks ago
How to discard code change ? And I will not be committing anything since I already left that temp job.
I want it to disappear when I start my IDE and when working on that project.
Campbell Ritchie
Marshal

Posts: 72479
315
posted 3 weeks ago
I would have thought your permission to commit anything to that Git repository should have been removed when you left that job.

tangara goh wrote:These are not warnings because I have similar yellow rectangles in another web app and that web app is confirmed running good and can compiled without any problem.

So how do I make all those yellow cylinders disappear ?

posted 3 weeks ago
I don't use Eclipse/Git integration, but if you are using Eclipse Team, it should be something like: right-click on the project root, click on Team, and then click on Disconnect.

Maybe someone else that has some experience with this can better help you.

Posts: 12825
279
posted 3 weeks ago
The real question is, why do you still have the code at all if you're no longer at that job? Delete the project.

If you're asking about a different project that is not related to your former employer, then you should only get those symbols if you've cloned another repository and made changes to it. How to discard your changes depends on what versioning tool the repository is using. If you're using Git, you can easily discard all changes by running the following line from the command prompt:

git reset tells Git to move the currently checked out branch to the specified commit. HEAD refers to the commit you're currently making changes to. So normally, git reset HEAD doesn't really do that much, because it just moves the currently checked out branch to the commit that it's already on. However, the --hard option tells Git to also throw away all changes in your working directory that have been made since the last commit to HEAD.