How do I uninstall or get rid of NGINX totally and its reverse proxy address?

I need your help again.

This is to do with a NGINX server that I have installed and 'uninstalled'.  There was no uninstalled in this NGINX folder so I simply deleted it.
OS: Windows 10.

So, now whenver I run my SpringBoot and I wanted to see if it is being rendered, it will go to this page here.  Pleas see attached.

I have been stuck with this issue for a few days already....

Hope someone can advise me how to get rid of IIS server or NGINX server...

Thanks in advance again. 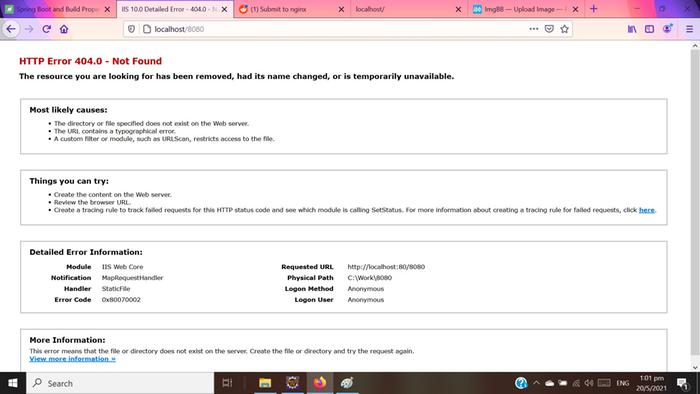 But something's listening on port 80, and if it's not nginx, it might be IIS or it might be some other app. In Linux, I could easily tell what that program was using netstat, but I'm not sure if the Windows version of netstat does that.

I'd be tempted to say it's the Spring Boot app itself, except that that's not a Tomcat 404 page, which is what I'd expect Spring Boot to serve. Plus to listen on port 80, you have to have administrator privileges.

posted 1 month ago
That page looks likes it is coming from IIS (Microsoft web server).  As Tim mentioned, you mistyped the URL, so the browser is connnecting to a server on port 80 (the default HTTP port) instead of port 8080.

If you do want to see which process is listen ting on a particular port, you can use the netstat command to find the PID (process  ID), and then use tasklist to find the name of the executable (in my example port 8003 and PID 24028):

posted 1 month ago
Trust Microsoft to hide in the fine print. I was looking for that, but it was all so blurry.