posted 3 months ago
This week, we're delighted to have Ken Kousen helping to answer questions about the new book Help Your Boss Help You: Convert Conflict Into Opportunities.
See the table of contents and an excerpt

We'll be selecting four random posters in this forum to win a free copy of the book provided by the publisher, Pragmatic. 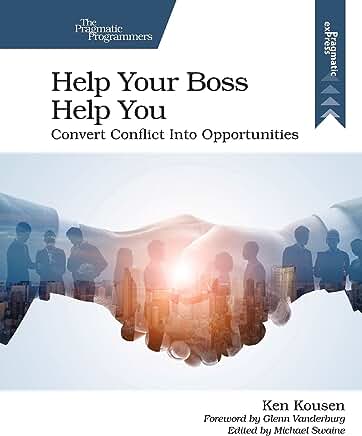 This book looks different from what I already have: your other book was about cooking coffee.

This book looks different from what I already have: your other book was about cooking coffee.

posted 3 months ago
Welcome Ken, I remember enjoying your "Making Java Groovy" book a few years ago. I must have missed the coffee book Campbell is talking about, but sounds interesting.

Help Your Boss Help You is really different for me, since it's my first non-technical book, though most of the examples come from my years in the engineering and IT industries.

posted 3 months ago
Oh I get it now. For a moment I thought you'd actually written a book about coffee but it was just Campbell being humorously cryptic.

Kenneth A. Kousen
gunslinger & author
Posts: 158
11
posted 3 months ago
On the humor front, when I wrote the Kotlin Cookbook, a non-technical friend of mine asked if it was a cookbook on how to cook kotlins, whatever they were. I think that person was joking, but in response I grabbed a copy of the book at my local Barnes and Noble and moved it over to the Cooking section to see what would happen.

When I revisited it about a week later, it had been returned to the IT section. Oh well.

Incidentally, the only reason my local B&N had those copies is because I asked them to order some. I signed them all and then waited as they sat on the shelf, fermenting, until eventually they got sent back to the publisher.

For HYBHY (my current book), Amazon still lists it as #1 New Release in Business Communication (#2 in Business Ethics) and claims it was released on July 27. If you look at B&N's web site, however, it claims the book doesn't come out until October, though you can pre-order it. That may hurt sales a bit.

Kenneth A. Kousen wrote:...they sat on the shelf, fermenting, until eventually they got sent back to the publisher.


Aw such a sad story. You must be the only Kotlin developer in your area, who also frequents actual book shops. Still it must be satisfying to see your book on the shelf in a bookshop although I don't expect your electricity provider accept smugness as payment.

It's true that most software developers used to buy ebooks directly from the publishers, like Manning or Pragmatic Programmers. But some of that is changing. For example, right before my Modern Java Recipes book came out, O'Reilly got rid of their online bookstore. Now they only supply books to distributors, and instead sell subscriptions to their own online O'Reilly Learning Platform. If you want a physical book, they actually link to Amazon.

It will be interesting to see how that evolves over time. For my current book, HYBHY, the Prag site https://pragprog.com/titles/kkmanage/help-your-boss-help-you/ only sells ebooks. If you want a print version, you go to Amazon https://www.amazon.com/Help-Your-Boss-You-Opportunities/dp/1680508229/ref=sr_1_4 .

Of course, that means when I give out coupon codes, they only work for the ebooks. I have no control over Amazon.

Btw, I'm in the process of preparing an audiobook version, which will be available through Audible (now a division of Amazon, sigh), iTunes, and some others.