How can a lead developer improve his skills of speaking at meetings and presentations?
I'm a member of Toastmasters as well, and I've done a few conference presentations.

There is a lot to learning how to do effective public speaking: from how you use your voice and your body, to how to use clear language and structuring your story with a clear opening, body and conclusion, and handling your nerves. It's really something that you have to practice a lot to get better at, and while you are practicing, you'll notice what your personal strong and weak points are, and which points you need to improve. Toastmasters is great for that - you get a lot of opportunities to practice, and your fellow club members will give you feedback which helps to improve yourself.

Make sure the format string matches what is actually in the string you are trying to parse.
show more
3 years ago
JSF

what was your first computer
My brother and I got a Commodore 64 in December 1984. I quickly became interested in programming, first in BASIC and later in assembly language.

A few years later we got a Commodore Amiga 2000. I learned to program in C on the Amiga.

When I started studying at university, I got my first PC, which was a 386SX at 20 MHz with 1 MB (yes, MB, not GB) RAM and Windows 3.1. I learned programming in C++ on that.
show more
4 years ago
Meaningless Drivel
Is it just me or that Stack Exchange (especially Stack Overflow) is almost useless?
Jon Skeet, the top question answerer on StackOverflow, recently wrote a blog post about StackOverflow culture.
show more
4 years ago
Meaningless Drivel 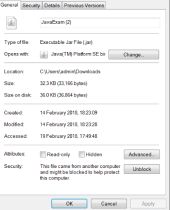 Jar file and its portability between engines
With the way you describe things, it is very hard to understand what you mean. Please use clear and simple language, instead of abstract and general terms such as an "engine".

What are you trying to do, and what problem are you experiencing exactly?

Are you trying to send a JAR file as an attachment via e-mail, and is your mail server blocking it? If yes, then that's most likely for security reasons. Some mail servers do not allow you to send any kind of file that might contain executable code, to protect the receiver of the e-mail from running arbitrary code received from an e-mail (which is one way that computer viruses are distributed).

If this is your problem, then it doesn't have anything to do with Java or JAR files, and is simply a security feature of the e-mail system. One simple way to fix it could be to change the extension of the JAR file to something else (".xyz" for example) and then asking the receiver to rename it back to ".jar" before running it.
show more
4 years ago
I/O and Streams
The (stock and other) Markets...A waste of money and time?
Nowadays, if you let your money sit on a savings account, it's only losing its value because the interest rate on savings accounts is almost zero.

There are many different ways to invest money in stocks. A relatively safe and easy way is to buy from a fund, which is a collection of stocks that are managed by whatever company or bank manages the fund. (I'm not sure if I'm using the right terms here, I'm not an expert either). About two years ago I did this and since the stock market has done very well in the past year, it's now up about 12% since when I bought it. My intention with this money is to keep it for the long term (I'm a freelancer and have to take care of my own pension, I don't have an employer to puts money in a pension fund for me).

If you really want to trade stocks of different companies directly, then yes, you would have to do a lot of research and learn how to follow the market and understand how to make decisions for buying and selling.

I bought Bitcoin for a few hundred euros a few weeks ago. Not as a serious investment, but just to see what would happen. Bitcoin went up more than 10x last year so it would be nice if my few hundred € would be worth a few thousand € in a year, and it's not so much money that if I'd lose it, I'd be seriously distressed. (The past week the Bitcoin fell quite a bit because different countries have announced they want to regulate cryptocoins more strictly, so right now I'm at a € 150 loss).
show more
4 years ago
Rattlesnake Pit
java.io.IOException: Server returned HTTP response code: 403 for URL:
403 means Forbidden. Maybe the website requires you to log in before you are allowed to view the webpage. It's also possible that the website detects that you are not a regular browser (maybe by looking at the User-Agent header) and block you, because it doesn't want automated bots to be able to read the page.

If you need to log in, you'll have to do more in your program than just try to read from the page. It's most likely easier to program that using a library such as Apache HttpClient - Java's standard classes for reading webpages are quite underpowered and don't (easily) allow you to do things like logging in on a website.
show more
4 years ago
Java in General
REST API: Limitations of Spring WebFlux + Spring Data JPA?
If you want all the benefits of reactive, async / non-blocking, you'll need to make the whole stack async / non-blocking. JDBC is indeed inherently a blocking API, so you can't build a fully reactive / non-blocking app if you need to access the database through JDBC.

Oracle seems to be working on a new, async / non-blocking database API, which is (provisionally) called ADBA, but there's not a lot of information on it available yet. It will probably take a few years before it's available. Besides the API itself, database vendors will also need to implement non-blocking drivers.
show more
4 years ago
Spring
Is anyone using Reactive MongoDB Template with Spring?
It's a bit hard to say without seeing the whole project, but it's probably not the findBy() call that causes the record to be created in the database, but something else in your project.

Spring Boot automatically configures and does a lot of things automatically, which is on one hand good because it makes things easy and you don't have to write a lot of code to make things work, but on the other hand it makes it difficult to understand exactly what happens when you run the application. One of the things Spring Boot can do is automatically pick up certain files to populate the database when you start the application. For example, if you're using a regular relational database, you can put a file named data.sql in src/main/resources and it will automatically be executed (see chapter 78 of the Spring Boot manual). Maybe a similar mechanism exists for MongoDB and you have a file somewhere that gets loaded into the database at startup.

If you want to know exactly what's happening at startup, you can start your Spring Boot application with the --debug option on the command line, which will cause Spring Boot to write a detailed auto-configuration report to the console, which is useful for finding out what exactly is happening.
show more
4 years ago
Reactive Progamming
2048
Yes, I think it was a hit on the web a few years ago and I've also played it for a while. Did you succeed in getting to 2048?

If you're tired of playing it yourself, you can try writing a program that plays it for you. Some people have used AI to write a program to play 2048.
show more
4 years ago
Meaningless Drivel
Can't understand why LocalDate.of() is a static method?
You correctly understood what "static" means.

The of() method of class LocalDate is a factory method. It's a static method because you don't call it on an existing LocalDate object. Instead, it creates and returns a new LocalDate object.
show more
4 years ago
Beginning Java
Are you using Kotlin with Spring 5?

Extension methods are a way to add methods to existing classes after the fact - or, that's what they seem to be at first sight.

Extension methods are not really dynamically added to a class - they are instead like any other external method, so they can for example not access the private variables of the class they are designed for.

Spring 5 does officially support Kotlin; the Kotlin support in Spring 5 mainly consists of two things: (1) making sure many things are annotated with @Nullable / @NonNull annotations so that it plays nice with Kotlin's null-safe type system, and (2) a number of extension methods to make working with Spring more convenient.

I've found, and I've seen from other projects / people using Kotlin, that extension methods are one of the most useful and powerful features that people pick up once they're going beyond the basics with Kotlin.

Just by looking at it I can already see an error in the very first line: you are trying to import a class named Sec from the package java.util, but that package does not contain a class named Sec. What was your intention with that line? You're not using the class Sec in the code, so it seems redundant.

There are more errors. For example, String Map<String, String> in line 9 and nre HashMap in line 12, and i+=2> in line 16. You'll need to fix those syntax errors first.
show more
4 years ago
Beginning Java

Are you worried about these bugs, do you think they will affect you?

Here's a good video explanation of how these bugs exactly work: