Scott Selikoff wrote:. . . declared methods from java.lang.Object do not count toward the SAM (single abstract method) test for functional interfaces. . . .

That only applies to its nine public methods. If you try to overwrite the two protected methods, they count as additional abstract methods because they now have a different access modifier.

Campbell Ritchie wrote:Whichever object you create implementing that interface, it will be created from a class and that class inherits the eleven non‑private methods of java.lang.Object.

Fun fact, if you try to overwrite methods in an interface that exist in java.lang.Object, they have to be compatible:

Scott and my 1Z0-815 (Java 11) book is out!
It’s available everywhere books are sold including Barnes and Nobles, Amazon, and Wiley Publishing.  Not sure about Safari online as that doesn’t cover the print edition.
show more
8 months ago
Programmer Certification (OCPJP)

SYBEX OCA/OCP Java SE 8 Programmer Practice Tests Chapter5 Question#9 Errata?
First off, I appreciate your interested and feedback in this topic.  We always appreciate feedback in our books!

For the exam, you need to know that a for-each loop (also known as an enhanced for loop) iterates in sequential order.  For this reason, I is correct and II is incorrect, making A the correct answer.  The question doesn't state that there is a loop iteration variable (aka a counter) in a for-each loop.  It simply states that if you iterating over an array, then it starts with the value stored in index 0, so it is correct as is.

A good portion of both OCA8 and OCP8 exams is knowing the "plumbing" of Java.  For example, you need to know when/if the compiler will add default constructors to classes, or implicit modifiers to interface members.  Knowing this helps answer questions where invalid or incompatible calls/modifiers are present.
show more
8 months ago
Associate Certification (OCAJP 7/8)
IZO-809 or IZO-816?
Hi Anas,

Whatever you choose, good luck in studying!
show more
8 months ago
Associate Certification (OCAJP 7/8)
Profile switch from Tester to developer. Any advice?
My best advice.. aside from studying and taking the cert... find a friend who can help get you a job as a developer, even if its just a side job.

Switching from testing to development, while possible, is not common in my experience.  For example, you might go in for a job interview for development but when they see you have testing experience they shift you to testing thinking you'd prefer to do what you know.  In order to get a development job, you have to play down your testing experience and play up your development experience.
show more
8 months ago
Jobs Discussion
char[] printing
True but what value is Object28274772918374 anyway?
show more
8 months ago
Java in General
char[] printing
Is it wrong that I wished toString() in Java outputted every object as json?  Aka... (if using Google's Gson).. new Gson.toJson(object)?

Specifically the default implementation, not where they've been overwritten by a class.
show more
8 months ago
Java in General 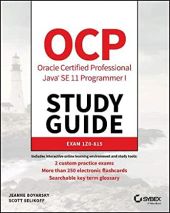 * Winners: OCP Oracle Certified Professional Java SE 11 Programmer I Study Guide: Exam 1Z0-815
Congratulations!!! We hope you enjoy!
show more
8 months ago
Programmer Certification (OCPJP)
Get the Kindle version of the OCP 8 book
Sorry, distribution is handled by the publisher, not us.  That said, I greatly prefer the physical copy as that is the one we had a hand in reviewing and typesetting.  I've heard from some readers that the Kindle version has some layout problems.  I'm not sure if that's because of particular devices, but the short version is we did not have any involving in laying out how it looks in the Kindle copy.
show more
8 months ago
Programmer Certification (OCPJP)
For Jeanne and Scott: why upgrade?

Javier Benjamin wrote:Not to justify myself but Oracle is not doing a good job being clear about releases (cadence, free or not and how/when ...).


I agree. I've given a talk at a number of user groups and conferences on the topic. I make a point of saying that I'm not affiliated with any of the vendors. I'm just trying to communicate the info

I think it took me 3-4 attempts to fully understand it.  While Oracle says "Java is still free", there's a long list of exceptions/conditions on that.  For example, if you don't mind updating versions of Java every 6 months in project, then yes, it's free.  If you want to stick with one version for awhile, you either need to pay Oracle, pay a third party vendor, or use the OpenJDK version.  It's not all bad, though, as different providers offer various performance improvements and tuning, more than you might get with the standard JDK.

I think my biggest problem is that it takes me 15-25 minutes to fully explain Java's support/license structure.  If you can't explain it in 30 seconds, then there's probably something nefarious going.... aka, I don't think it's a secret Oracle would love for everyone to purchase support licenses.
show more
8 months ago
Programmer Certification (OCPJP)
What is in scope for the 1z0-815 with regard to maps and collections?
Collections are one of my favorite things in the Java API... whether they are in scope or not, learn them!  They help on a lot in practice.  I also recommend the Eclipse Collections framework, a lot of really cool stuff in there.
show more
8 months ago
Programmer Certification (OCPJP)