Newbie Question - How to Store Data to Cloud Database
Hello,
I'm a newbie to mobile app development and have been cutting my teeth on Android Studio. My question is, how I send information that I collect from an Android Phone or Tablet to a relational database in the cloud. Right now I'm "cloud agnostic", wanting to find the best deal "money wise" to do development work on the cloud side.

Specifically, are there any frameworks, etc., that would be "best" to start with. The amount of data to do testing would be very small for testing but, if successful, would grow over several years to a rather large amount of data. I'm not sure exactly the size because I haven't laid out exactly what data is to be captured. I'm still in the "proof of concept" stage but I have to at least get the data up to the cloud from the phone.

Thanks.
show more
5 years ago
Android
What Is A "Higher Level Table"?

Bob Scott wrote:I'm sorry that this doesn't exactly conform to the topic of this thread but I chose the one I thought closest to my question.

Just wanted to close this thread after looking again at what this other programmer had written to me. (it was ~3 1/2 years ago that he wrote it). When he spoke of "top level table" he was simply referring to my design where I had a table with a primary key in it. Not exactly rocket science. ;)
show more
7 years ago
Object Relational Mapping
What Is A "Higher Level Table"?
I'm sorry that this doesn't exactly conform to the topic of this thread but I chose the one I thought closest to my question.

Bob Scott wrote:I have already purchased this book and thus would prefer to use it but if I have to get a different one I will. Thanks for the assistance on my getting started on this. :)

Hi Bob,
you don't have to get a second book for the certificate. Just buy the enthuware mockup tests. I passed the exam with a high rating and I used the same book. After reading it I did all of the enthuware exams. After every exam I reviewed my questions, read all the question hints of the developers and tried to memorize my weak spots.

Thanks very much for the timely answer, Bernhard. I will indeed do as you suggest.
show more
7 years ago
Programmer Certification (OCPJP)
Java 7 candidates: OCA, OCP and K&B 6 - take 2
I am wondering what the general consensus is concerning the book by Edward Finegan and Robert Liquori (OCA Java SE 7 Programmer I Study Guide )? Maybe I assumed too much but I assumed it was adequate to pass Exam 1Z0-803.

I have already purchased this book and thus would prefer to use it but if I have to get a different one I will. Thanks for the assistance on my getting started on this. :)
show more
7 years ago
Programmer Certification (OCPJP)
Problem With Initial Setup
Windows 7 SP1

I put the small test program in my Notepad and pasted it into the DOS box, then tried to run the compiler(with the source code). For some reason, it is not finding the compiler.
show more
7 years ago
Beginning Java 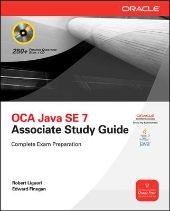 Nadia Jahar wrote:I just took the exam and scored 96%...which was such a relief!

I've been a Java programmer for about a year now....but this exam can be pretty tricky! They ask you questions about things you would never ever do in code...so you don't even know that they are valid and can be done! Like the fact that this is valid:
for (;;)

I bought Liguori's book to start with, which is a good primer and I like the questions at the end of each chapter. But I think what really did the trick is enthuware, it's excellent!! Neither the book or enthuware teach you HOW to program they just prepare you for what you will be tested on. Enthuware.com costs $9.95 and is worth every single penny. They have superb explanations for each question and not one single mistake in any of their 500 questions. And about half (or more) of the questions on the exam were exactly the same as the ones in enthuware.

I must add though, that I feel the exams in enthuware are harder than the real thing....I took all the Objective Test and Practice Tests, and I didn't pass any of the Standard tests! I was scoring about an average of 70%, until the very last one which I got 79%. Failing all the tests did make we work harder and hence I scored a 96%.

Now onto studying for the OCPJP....

What I am going to do is to create a small project. My project coding will be behind where I am in the book at any given time. I will use the constructs in my project as I learn them, to cement them in my brain. It can't be thousands of lines of code but will be a small but "meaty" program. Once I pass the 803 test, I'm going to start with the code from the 803 project and continue on the project for the 804 with same approach. I am making the topic fun so I will have fun doing it.

Sounds interesting! How are you going to add fun to your preparation? I believe others can also benefit from it.


Hi Mala,
Well, this project idea is really limited only by your imagination and skill level. You can start from scratch, writing everything by hand or you can take a sample as your starting place. I noticed that Netbeans 7.3 comes with a sample that is a customer database. (It comes with the sample with and without Spring). If I use it I would use it without Spring because of my skill level. A scenario that is fun for one is boring for another so I might be the only one that does this. I haven't worked out the details but I'm going to start with a hotel that has conventions. I'll have a database initially that keeps up with these conventions. Then, perhaps while studying 804 I'll use this initial database to feed a corporate database from the initial database and many other fictional databases that I'll probably have to pretend that they are there by feeding the corporate database some fictitious data using code. Depending on your skill-set and what you want to do, you could even make this corporate database use Cassandra or something like that. The conventions don't have to be developer conventions, some could be fashion show conventions, or any type.

I realize that this is a rather unimaginative scenario, but it's one I can do during 803. I might change it up entirely when I start 804.

Well, that's what I've thought of so far. Thanks for writing back. If you have any suggestions or something I've overlooked or could add, I would gratefully appreciate it.

haydnguy
show more
8 years ago
Certification Results
Failed OCJP
Hi Herland,
I believe Mala has some wisdom in her post. (As do others). I will tell you what I am planning to do, and I haven't seen this anywhere although people have bound to have done it if I have thought of it. What I am going to do is to create a small project. My project coding will be behind where I am in the book at any given time. I will use the constructs in my project as I learn them, to cement them in my brain. It can't be thousands of lines of code but will be a small but "meaty" program. Once I pass the 803 test, I'm going to start with the code from the 803 project and continue on the project for the 804 with same approach. I am making the topic fun so I will have fun doing it.

Best of luck in your studies
show more
8 years ago
Certification Results
Anyone preparing for associate level exam
I am at the beginning of my studies. I decided after much mental debate to use Mala Gupta's Certification Guide in Manning Press. I had originally planned to use the Finegan/Liguori Study Guide, but because of problems I outlined in another thread in this forum, I decided it would not be wise to get two copies of the same book. So I'm going with the Gupta book. I wanted to say that I was just looking at the Introductory stuff and it compares the previous exam to the OCAJP 7 is more difficult than the previous. (They raised the bar.) I think that's a good thing for us developers. It will help us and the employer too. For myself, I see it being an immerse exercise in my study.
show more
8 years ago
Associate Certification (OCAJP 7/8)
Anyone preparing for associate level exam
Hello uma, welcome to the Ranch!

I see that you posted this a few weeks ago and I was curious as to how your studies are going? Still planning to take the exam at the end of April?

What study material are you using? Do you thing they are a good resource?

EDIT: I see from Amazon that I ordered the book on October 31. That seems like I got ripped if it was released September. I guess Amazon is late sometimes in getting the latest book out.

EDIT: My unique access code is not in inside flap of the CD holder at the back of the book. I can't swear that it wasn't there but I know that I wouldn't have take it off. If it was there it fell off.

Case closed: I get version 2.

If you received version 1 I would suggest calling Amazon. They are pretty good about returns.
show more
8 years ago
Associate Certification (OCAJP 7/8)