Why do we put this in the addActionListener

Sergiu Dobozi wrote:So addActionListener really in fact is taking just a reference to an object of the class it is in as a parameter.


No. It takes a reference to any object that implements the ActionListener interface. Which the current class in your example happens to do.
show more
5 years ago
Beginning Java
Operator Precedence Question

Yes but my question is the following:
why in the bellow case it would first evaluate the parenthesis, and in the above case not?


What is the difference in this scenario???

To clarify. In this case it is still evaluating from left to right. That just happens to produce the same result as evaluating the parentheses first.
show more
5 years ago
Beginning Java
Operator Precedence Question

Yes but my question is the following:
why in the bellow case it would first evaluate the parenthesis, and in the above case not?


What is the difference in this scenario???

a is 14
show more
5 years ago
Beginning Java
Can I avoid having to create a new object here?

Junilu Lacar wrote:Then read Chapter 2 on Names to see why I and O are horrible names.

Well, they are generic type parameters after all. Would you also say names like T, R, K, V and E are also horrible?
show more
5 years ago
Java in General
Kotlin Night recordings

Ole Sandum wrote:
Was this the one in London, by any chance?

Of course it was. Silly me didn't bother to click the link before posting.
show more
5 years ago
Kotlin
Kotlin Night recordings
Looks very interesting. Definitely will watch it when I find the time. Thank you for this.
Was this the one in London, by any chance?
show more
5 years ago
Kotlin
Synchronization
Well, you didn't ask a question. What is your doubt regarding this?
show more
5 years ago
Beginning Java
"Nothing" as a generic type parameter
I started this thread a while ago while learning the ins and outs (pun intended) of Kotlin. Back then, this thing confused me mainly because of two things:

1. I wasn't really experienced with Kotlin. The transition from Java was a bit tough.
2. Java being the only programming language in which I had previously used Generics, the notion of declaration site variance was new to me (Java only has use site variance)

Now, coming back to this thread and reflecting, I can see why I was confused. There were a number of new concepts in play. Not just one.

First, there is declaration site variance. This seemed intuitive at first, but I realised there was a bit more to it than I initially thought. And combining this with use site variance didn't make it any easier.
Then, there was something the tutorial completely failed to mention. Namely, the type Nothing acts in Kotlin as a subtype of all types. This was such an important part to understanding the whole idea, that it baffles me that they left it out.

Now, having worked with both C# and Kotlin in a couple of projects, this is no longer an issue to me, but i felt it was important to come back and clarify this just in case someone else comes along with the same problem.

Thank you again, for helping

OCP 8 Chapter 2 Exam: Does Silngleton requires to have public static method to get the instance??

Jeanne Boyarsky wrote:In the real world, you are correct. In the simplified world of the exam, the singleton is shared more broadly. On the bright side, the real exam tells you how many answers are correct. If it said "choose three", I bet you'd have included F!

No. I think this would be an unacceptable mistake in the question if it happened on the real exam. A singleton simply does not require the instance to be publicly available. Moreover, a method isn't the only way to expose data.

Now, I realise that using a method to return the instance follows encapsulation and all that, but in the case of a singleton I do not think it adds any value.

In my opinion, the best way to expose a singleton instance is with a (public) static final field initialised at declaration.

So that's at least one alternative. I know the exam likes to be vague and tricky, but here I think it is just wrong.
show more
5 years ago
Programmer Certification (OCPJP)
Problem using the keyword this in a method called inside a for loop
Would you kindly post the code again, with the missibg end of that method added?
show more
5 years ago
Java in General 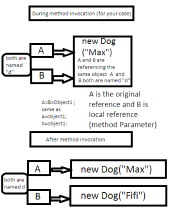 Pass by value vs pass by reference

Suhaas Mohandos wrote:1. So if I use new in the called method, the change will not be reflected in the calling method?


That depends entirely on what you assign the value to. If you assign the new value to the parameter variable, no change will be reflected outside the method (because of pass-by-value). If you alter the object referred to by the parameter variable - for instance, you assign the value to an instance field of the referenced object - then you will see the change reflected outside the method. Not because of pass-by-reference (there is no such thing in Java). But because multiple variables can point to the same object.


Suhaas Mohandos wrote:2. If you are saying primitives are pass by value and objects are also passed by value in java then give me a fresh example of both(primitive and object) where the change is not reflected in the calling method?

As you can see, no change.


Suhaas Mohandos wrote:3. When  they say java is pass by value does it mean that changes made in the called method will not affect the calling method?


It means changes made to the parameter variable will not affect the variable that was passed to the method. That is, if you make the parameter variable point to another value, the passed variable will not point to the same value. Because, it isn't really the variable that is passed to the method, it is its value that is passed. Hence pass-by-value.
show more
5 years ago
Beginning Java

Jesper de Jong wrote:That has to do with generics, specifically with wildcards.

This is sometimes useful, but it's also a little more advanced and confusing to understand. One very common problem is that people think a Set<?> is a set that can contain any kind of object, but that's not the case; it's a Set that contains objects of one specific type, but what that type is, is unknown. This is sometimes useful if the method that works on the Set for example doesn't care or need to know what exactly the type of the objects in the Set is.

...but more often than not, you see bounded wildcards, like Set<? extends CharSequence> and Set<? super String>.