The problem was in the IDE, IntelliJ.

The code compiled when I used "mvn clean install", so it couldn't be a problem of maven and, in my humble opinion, it had to be something in the IDE. We, a fellow java programmer, started with "mvn --version" this gives the following result

When we looked in IntelliJ we found in the settings (Ctrl+Alt+S) > Build, Execution, Deployment > Build Tools > Maven the setting for "Maven home directory". 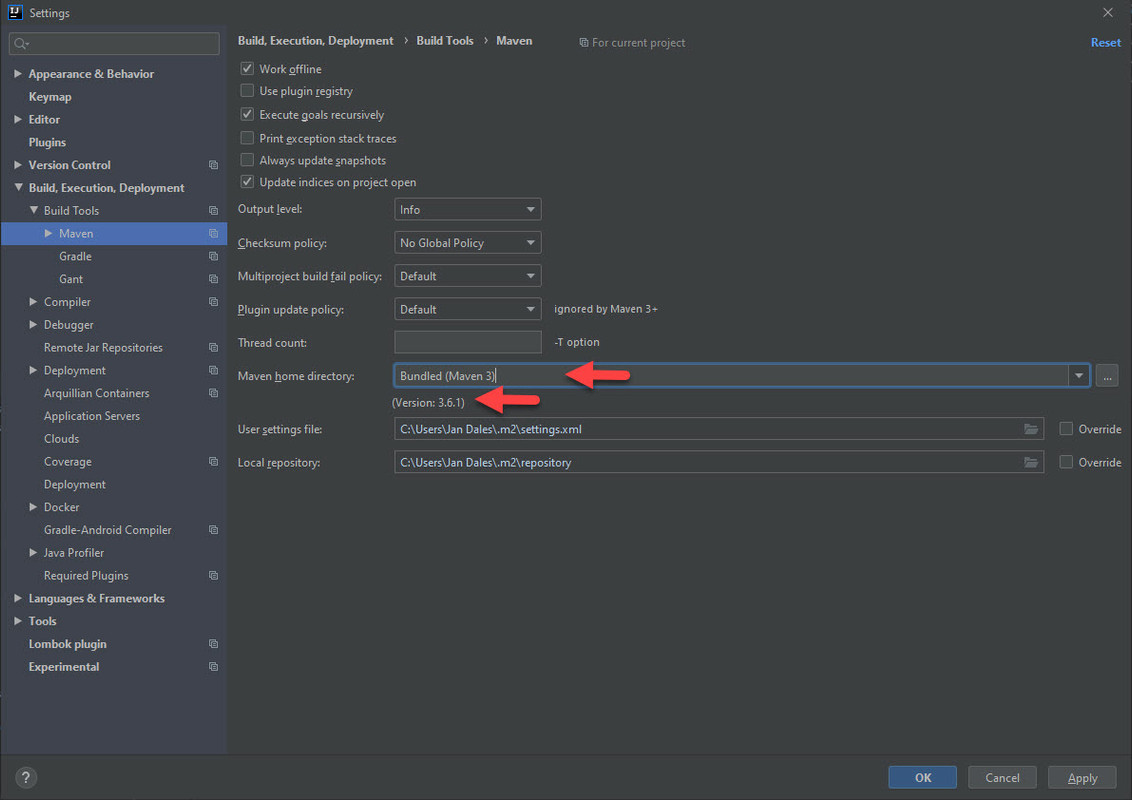 As you can see, the Bundled Maven is divergent because of the version number. Version 3.6.3 via mvn -v and 3.6.1 in the settings.

We changed the value in "Maven home directory" to "C:/Program Files/Java/apache-maven-3.6.3".

After that we tried to build again and the result was that it build without any problem. Besides that, all the errors in the Idea, bases on the missing javax.servlet, has disappeared.

So in the end the problem turned out not te be as big as I expected, fortunately.

Last but not least, I want to thank Stephan and Tim for their support.

I tried so many things to make the project build again, that I unfortenately can't tell you which specific action causes this problem. I'm sorry.
But this mistake is also a new lesson learned...

At this point I want to focus on recovery instead of finding the cause of the problem.

I tried an exlusion in the pom, but that didn't work.

Hopefully someone on the forum has an idea in which direction to look for a solution.

Problem with javax.servlet
Thank you for the information. I thought it was something like this.

A few weeks ago I ran into this issue for the first time. As a newbee to Java my thoughts were that when the javax.servlet couldn't be found I have to download it so Java could find it. Now, it's using the javax.servlet-api-4.0.0-b01.jar who is in the default download folder op my laptop.
When I rename this file I also get the message.

But because of this stupid action my dependency tree messed up. How do I repair this. My goal is that the local javax.servlet will not be used anymore and I have the right javax.servlet version "on board" in my project.

Is there a clear solution for this. I have experience with programming for years in an IBM environment and MS Dynamics NAV. The java language is not the most difficult, but to me the environment is.

Problem with javax.servlet
Hi there,

I have a problem with javax.servlet. A part of my dependencie tree lookes like


The main thing here is that you can see that the javax.servlet is in the tree


In the pom I defined a java.version.

The fact is that I have installed java 11 on my new laptop and of course in the pom I first used version 11.

When I build with version 11 I get the error shown here under. This is of course a part of the messages

The only thing I have to change to make the project build is changing java.version from 11 to 1.8 in the pom

Why does java 11 not see the javax.servlet in de dependency tree??? I can't stand that I can't figure out what causes the problem. I hope someone knows.

I typed "GET" and "IS" in uppercase to emphasize them. I know in the real world they should be typed in lowercase. But anyway, I now know what to use with booleans and non-booleans. For me that was the main thing because, to my humble opinion, it is very important to use standards so everyone is able to read my code.

The title of the book is:
OCA Oracle Certified Associate Java SE 8 Programmer I Study Guide
By Jeanne Boyarsky and Scott Selikoff

In chapter 4 in table 4.5 about naming conventions I read that "Getter methods begin with IS or GET if eht property is BOOLEAN." In the summary of chapter 4 is stated that "Javabeans use methods beginning with IS and GET  for BOOLEAN and NON_BOOLEAN property type, respectively." These 2 lines contradicts.