paul nisset wrote:Joining a mining pool definitely makes senses.It's an interesting idea .
Whether it's a good use of natural resources/vast amounts of energy to produce a concept of money is another thing.
Thanks .

There are plenty of good articles that discuss the environmental impacts of BItcoin. Here are some that I recommend:

Among the responses to the criticizm of Bitcoin's energy consuption are:

* Bitcion uses mostly overcapacity from renewable energy soruces like hydro. (3)
* Bitcoin has in it's 10 years of existence consumed (mostly renewable) about as much as US cars (mostrly fossil) do in three days. Also other comparisons are interesting, for example the power consumption of gold mining. (1), (3)
* Bitcoin is deflationary, which will reduce peoples will to consume, which will reduce emissions (2)

Tim Moores wrote:My impression is that these days the main factor (though not the only one) in whether mining will be profitable or not is the price of electricity. If you have to buy electricity from a provider at the prevailing retail rate, there's no chance it will be profitable. It might have been 5 years ago, but no longer - too much computational power is needed to mine one bitcoin now.

Yes, you're absolutely right. That's the most important factor. If you can't get cheap electricity, you're pretty much toast. The more expensive the electricity, the more efficient mining you need to be profitable. As an extreme, if you have free electricity you'd be profitable mining using your laptop (not taking into account the cost of wear and tear on your laptop of course).

I think that once solar energy gets more mainstream and cheap, people will start to use bitcoin mining as a way of monetize their overcapacity instead of selling it to the power grid. There are people currently experimenting with this. I've very excited about it, but I don't do it myself.
show more
1 year ago
Cloud/Virtualization
Grokking Bitcoin

Timothy Richards wrote:Hi Kalle,
I don’t fully understand the interest in Bitcoin or any other crypto-currencies really. Why would someone want to use another “monetary unit” which has even less backing than any governments’ fiat currency? Being entirely digital seems to make it akin to vapor-ware and criminals have already been seen taking advantage of this by “disappearing with” huge sums of BitCoin, i.e. - Mt. Gox for example. How can any private individual have a sense of trust for this system?
Thanks,
Tim Richards

I can't speak for everyone, but I find Bitcoin interesting because it solves real problems. Traditional currencies are prone to

Bitcoin solves this by removing all central points of control. This is essentially what this book is about; How it can work without a central point of authority.

As a result of being free from a central point of control, there is no one to go to when bad stuff happens, for example when Mt Gox became "Empty Gox. When the money is stolen, there's no way to revert the thief's transaction. The thing with Bitcoin is that the security of your money is up to you to manage, and when the money is stolen it's not the system's fault, its the user who couldn't protect its own money. Bitcoin as a system has not been hacked a single time, but a lot of exchages' wallets have. Over and over. We are still in early immature days regarding wallet security.

I think criminals will take advantage of this infrastructure just as they take advantage of other infrastructure like roads and cellphone networks. If they do, it's in a way a sign that the system works as intended. Also, since there's no central point of control, there's no way to shut the Bitcoin system down, so we'll have to live with it no matter what we think about it.

I'm not an expert on the mining industry, but I can provide some elaboration.

When individuals mine, they usually connect to a so called mining pool to mine cooperatively with other miners. The pool acts as a single miner to the outside world, but it's comprised of several miners. All miners of a pool share all that pool's rewards proportionally to their contributed hash power.

The nice thing with joining a mining pool is that you get tiny rewards often insted of big rewards randomly every XX years. You'll get paid a little every time your pool finds a block. You probably don't want to buy a mining rig for $2k and then hope that your rig will find a block within reasonable time, for example two years, because that won't happen.

Big mining companies often enjoy advantages like cheap electricity deals with power companies. Individuals mining at home (in a pool or not) can of course use solar and other cheap sources, but it's a hassle to set up.

Mining equipment today is highly specialized, so using your laptop, or graphics card will definitely not be profitable. To enter the game you need to get state-of-the-art equipment to be competitive, and to stay competitive you need to keep pace with technology advancements.

Thank you for your question
show more
1 year ago
Cloud/Virtualization
Grokking Bitcoin: what is best way to learn technology behind Bitcoin
Thank you

Please give it an honest review on Amazon when you've read it. It helps other potential readers make an informed buying decision, and it helps me improving my writing.
show more
1 year ago
Cloud/Virtualization
Grokking Bitcoin: what is best way to learn technology behind Bitcoin
Helllo

Apart from my book, that's aimed exactly at people new to Bitcoin who wants to learn about the tech behind Bitcoin, Jameson Lopp (@lopp on twitter) maintains a great curated list of resources at https://www.lopp.net/bitcoin-information.html. There are plenty of good ones there.


But I'd say reading a good book on the subject is probably superior to navigating the available online information. Even though a book can feel dense to wade through, it's probably a lot more time efficient than trying to get the full picture from various scattered pieces of information online.

Thank you
show more
1 year ago
Cloud/Virtualization
Grokking Bitcoin: Getting more companies to accept Bitcoin
Let me clarify what I meant above:

Bitcoin on-chain payments are pretty mature, there's not much we can do to improve that experience. But the capacity is limited to a few MB of blockchain data per 10 minutes, which roughly  results in about 5-10 transactions per second.

So what I was trying to say is that on-chain payments is not an option for large scale merchant adoption. We'll have to rely on systems on top of Bitcoin, like the Lightning Network, and those systems are not very mature today. Lightning Network does kind of work today, but it's still considered experimental.
show more
1 year ago
Cloud/Virtualization
Grokking Bitcoin: Getting more companies to accept Bitcoin
Hi Carl

As you hinted, today, Bitcoin functions more as a store-of-value or speculation object rather than a means-of-exchange. There are some reasons for this:

* Bitcoin as a payment option is not very mature yet; Bitcoin payments are slower (and in some cases even more expensive) compared to legacy systems like credit cards.
* Bitcoin "on-chain" payments doesn't scale up to thousands of transactions per second as would be needed for large scale adoption.

What Bitcoin provides (in my opinion), is a base layer for money, on which systems can be built on top. For example, Lightning Network is a system that enables instant payments that can be arbitrarily small. You can pay 0.00000001 BTC (a satoshi, the smallest unit in Bitcoin) instantly over the lightning network to anyone else on the lightning network. These payments are backed by bitcoins in the Bitcoin blockchain (ledger), but the actual on-chain settlement is deferred to a later point in time.

So until we have more mature and scalable options for merchants, I don't think we'll see much adoption. But I think it might go fast once the ball starts rolling.

On the other hand, Bitcoin works amazingly well for larger payments (values of $100 and upwards), especially internationally.
show more
1 year ago
Cloud/Virtualization 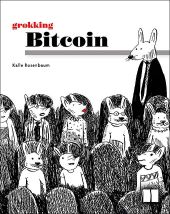 (BTW, the book cover image is outdated, get the correct one from https://www.manning.com/books/grokking-bitcoin).
show more
1 year ago
Cloud/Virtualization
Grokking Bitcoin: Hello everyone!
I'm the author of Grokking Bitcoin, and I'm looking forward to answering any questions you might have. There are no stupid questions, only stupid answers. I'm 45 yo andI live in Sweden with my family and have spend the last 2.5 years writing this book that I hope will help enlighten people and help them on their journey towards self-sovereignty.

Hit me!
show more
1 year ago
Cloud/Virtualization
Grokking Bitcoin: I am interested in your book since it starts teaching the foundations.
Thank you,

It's my sincere hope that this book will be a great jumpstart for newcomers to understanding Bitcoin's fundamentals.

I hope you'll like it.
show more
1 year ago
Cloud/Virtualization