The Typescript Worksop: Intended audience for book?
Wow, it has been a while since I have seen a programming book with that many authors... I'd guess choosing to form a sizeable team brings a lot of challenges (getting people to agree is usually a hard thing), but for us readers it is  nice to have the expertise of many compiled in a book. So, I can only guess how much sweat and love went into those 700 pages, congratulations for the publishing.

I will start with the usual question: is it for the seasoned developer or is it accessible for the Typescript neophyte?
show more
2 months ago
Angular and TypeScript
Programming Scala: Scalability(...) – Target audience
Hello Dean Wampler, thanks for hanging with us.

Who is this book for? Anyone who wants to learn Scala, the intermediate programmer, the seasoned ones... Is it a beginner-friendly condensed guide or a reference book?
show more
6 months ago
Scala 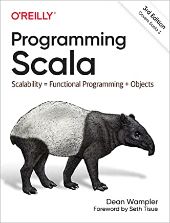 * Welcome Dean Wampler
Publishig any book requires plenty work already. When it comes to tech/education, there's a lot of extra fuss to care about.

Welcome Dean Wampler, and congratulations for your work.
show more
6 months ago
Scala
Introduction:Jonatas Silveira de Andrade
I just checked and Core Java for The Impatient (and also for the REALLY impatient) is also from Horstmann.

Will give a peek on all those then make my move.

Thanks for the recommendations. As I told before, I'm looking for a career change, so I'm a bit lost on choosing a path... Well, let's keep upgrading the toolbox for now, it won't hurt, right?
show more
6 months ago
Introductions
Introduction:Jonatas Silveira de Andrade
Hello, Ritchie!

I haven't bought it yet, I got a recommendation for it and indeed, the most recent one I was able to find anywhere was a 2006 edition. There is a 2014 "Thinking in Java: Advanced Features", but it is not Bruce's.

What would you recommend as a follow-up to HF Java, then?

I was quite attracted by "for the impatient" series title (the only place I ever grow impatient is the classroom haha), however we shall not judge a book for it's cover, shall we?

show more
6 months ago
Beginning Java
Head First Java - ¿enhanced? DotComBuster
Well, just started OO at university. I judged the source material too old and dry and after some searching around I fetched Kathy's guide to start learning java.

All giggles until I met the Sink-a-DotCom game...

Although the book recommendation regarding this particular piece of code was to "back away slowly" and let it be, after giving it a peek, I.. Couldn't.

So, I made a few changes:


Coincidentally, I ended with exactly 1 less line of code 😀
Of the changes above, I regret removing the numeric grid system. During implementation, I realized all those String and Integer parsing methods would spoil any performance gains from the reduced attempts improvement. But it was actually a good thing, I got to mess around the String class and methods a bit due to that. Now I know java allows chars increments in C-fashion style 😊

I've cut the getUserInput method as it was left untouched.

Anyways, which of those do you think is easier for a beginner to understand?
Ps.: As someone said 14 years ago, a spoiler tag would be nice, wouldn't it?

(Code following, too big for a single post)
show more
6 months ago
Beginning Java
Introduction:Jonatas Silveira de Andrade
Hey there Yehonathan, I've also just joined and was looking for a proper introduction tread (we really should have a pinned one).

I found my way to the Ranch at Kathy's Head First Java. Started a week ago, I'm about reaching half of the volume now.

Already planning the next reading. Is there anything better than Bruce's Thinking in Java 4th ed. by now?
show more
6 months ago
Introductions