riginally posted by Solveig Laura Haugland:
I got a French major, lived there for seven months, and pretty much suck at it since French to my very Germanic brain all sounds like "eugheux".

>> Maybe you should try learning the Geneva dialect. My wife says Geneva French is very Germanic.

Anything less French is better. ;> I actually think I picked up Norwegian somewhat easily when I was there, or at least less uneasily ;> than French. If only I'd learned Norwegian like my parents wanted me to.

quote:
Also, regarding double negatives: they can be useful and add meaning. Yes, Strunk and White would probably like to cut off my right hand for saying something like "It's not unflattering," the meaning is subtly different from "It's flattering."

>> That's not what people mean by double-negative, since removal of either of them changes the meaning. We're talking about _redundant_ negatives, as in saying to a childless woman, "Du hast nicht keine Kinder!" ("You ain't got no kids!")

Oh, gotcha. Yes. Well, the next time anyone gives me a hard time about double negatives for doing that, I will tell them they ain't got no understanding of double negatives.
show more
14 years ago
Meaningless Drivel
"Even I" vs. "I also"
I got a French major, lived there for seven months, and pretty much suck at it since French to my very Germanic brain all sounds like "eugheux". I'm impressed by anyone speaking a foreign language. So sure, it's good to know that "Even I" sounds conceited to us native English speakers, but if that's your biggest problem writing or speaking English, you're in GREAT shape.

Also, regarding double negatives: they can be useful and add meaning. Yes, Strunk and White would probably like to cut off my right hand for saying something like "It's not unflattering," the meaning is subtly different from "It's flattering."

As Steve Martin says, some people have a way with words....some people....not have way.

I thought I had something else to say but can't remember it. Plus, the tables are filling up here at Baked in Telluride and somebody probably wants my seat. Well, to be absolutely precise, I presume they desire the chair I'm sitting in.
show more
14 years ago
Meaningless Drivel
The game of four
Four jobs you've had in your life: Phone operator, cherry sorter, hotel maid, techwriter
Four movies you could watch over and over: Dangerous Liaisons, Best in Show, The Jerk, Princess Bride
Four movies that made a huge impression on me but I can't watch very frequently because they're so sad: Brokeback Mountain, A Simple Plan, Damage, Million Dollar Baby
Four places you've lived: Juneau AK, Rennes France, Fargo ND, Boulder CO
Four TV shows you love to watch: Buffy, House, Simpsons, Six Feet Under
Four places you've been on vacation: Estes Park, Outer Banks...hmm, I don't think I really go on vacation
Four websites you visit daily: Amazon rankings, yahoo/google news, Eddie Bauer Outlet ;> , blog stats/technorati.
Four of your favorite foods: Ice cream, any Thai curry, nuts, pumpkin pie.
Four places you'd rather be: I'm in a small town in Wyoming right now...
Four albums you can't live without: Buffy Musical Soundtrack (Season 6 Episode 7), Lyle Lovett's Step Inside This House, my Best Of Sam Bush mix CD, Great Big Sea
[ January 11, 2006: Message edited by: Solveig Laura Haugland ]

"She'll Love It" is a guide to all sorts of gift ideas, from books to weekend trips, plus practical and socially responsible gifts. There are a bunch of real-life anecdotes, some from contributors in the Meaningless Drivel forum! Specific topics are at http://datingpowertools.blogs.com/tocs/giftbooktoc.pdf

Oh, and this is related to Java because....um... ;> Java is another name for coffee, which is a suggested gift item. 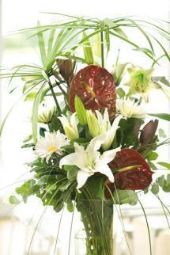 Guys and surprise gifts?
That's such a Homer! I'm reminded of the bowling ball episode. ;>

Elaine, I love the vice kit! I've got a chapter on kits--luxury bath kits, summer reading kits, etc.--and this is a great idea.

A left-handed friend of mine got into deep "you-know-what" with his right-handed wife one Christmas. Bought her a set of left-handed golf clubs!

My hubby is the type that would think even the "smilie" type of flower bouquet was too sissy. He rarely even seems impressed with receiving ANY gift (though he IS always appreciative). On his birthday last year, I put together & gave him a "Vice Bucket". It was a large-sized horse feed bucket (he loves his horses), filled with things like Crown Royal Whiskey, Patron Tequila, some expensive cigars, and a fine piece of reading material... you know the kind with all the great articles...

He loved it, & has been bragging ever since! This year for his b-day (today!), I did a similar thing, only in a mid-sized ice chest. Can't wait to see his face!

Guys and surprise gifts?
This is the other way around, my boyfriend did this for me last night, but I would think it would be nice.

He showed up at my house without calling ahead of time, as a surprise, and brought with him champagne (well, Asti, but it's our favorite), takeout Thai (our cuisine of choice), flowers, and two candles. Nothing wildly out of the ordinary but very nice and I would think appreciated by guys too, yes? (Substitute favorite alcoholic drink, favorite takeout food, maybe a small Tick or XMen-shaped candle).

Guys and surprise gifts?
This is very topical since I'm in the last week or so of putting together a gift-giving book for guys--how to get gifts, surprise and other, for their wife or girlfriend. (Or both, I guess, if you're into that. ;> )

I'd like to use some of these ideas if I may since the surprise factor is nice for women too, of course.

Guys, do you have any anecdotes about gifts you've given a female sweetie? Good or bad, and why? I'm looking to add more real-life examples.

Women, ditto--do you have anecdotes of a good or bad gift and why? Or a gift like a vacuum cleaner that was actually just what you wanted?

Thanks,
Solveig
show more
16 years ago
Meaningless Drivel
how to make gf happy at anniversary?
Hi,

A few ideas:
- first edition of her favorite book as a child, or just favorite book
- spa day type thing--manicure/pedicure plus facial and massage
- send her and a friend or two out to dinner and a chick flick? Or to a pedicure spa thing
- if she likes kitsch, www.archiemcphee.com is fun
- dance lessons, if she wants that? send her to a series of lessons and you take the same kinds of lessons where you are, go dancing when you see her again
- put together a gift basket type thing:
luxury bath theme, soaps and pretty robe and plastic wine glass
picnic theme, small picnic basket, nonperishable foods, cute cloth to spread on ground
summer reading theme, assortment of chick lit, mysteries, other lite but good reading with either mug and tea or glass and lemonade mix, possibly with cute sunglasses and beach towel if she likes to read outside


Originally posted by Jesus Angeles:
hi, any ideas? its my anniversary with my gf soon, and i am looking for ideas making it a nice one

Originally posted by Alvin chew:
hi, solveig, i'm from asia country (malaysia), i shopping around the bookstore, but i didn't see this book around, when will asia country start selling this book ?

Not sure...I'll ask my editor Monday and post here. Borders in the US doesn't necessarily even have it in stock yet. They're way behind Amazon.

I think that such a book would come with two burly guys to help you carry it around. I.e. it would be Too Big.

I'll see if Mark or someone else can answer the other questions.

Originally posted by r rajeev:
sorry i posted a new thread instead on putting my reply here

I have been seeing new J2EE books coming in and out of the markets dialy.. is this another addon ?? i would like to read a book which take me from the very basics to the very advanced.. can i find it here ?? its been a while i have worked on EJB, i am working an architecture similar to EJB but its not EJB can i imporve my EJB skills if i go and get ur book ?? wat is new in it which is not in others ???

Originally posted by angelo celeste:
Would that be a Library?

Yep, you can tell by the poodles outside. ;> And since it's a repository of information, and the bookmobile dirty read outside....it's just kind of moderately cute and I enjoy it. That's all.

That's on there. But I'm lookin' for people to find the SUBTLE stuff. ;>

Yes! Well done. That's my favorite one on the cover.

There's one more, a specific type of thing in J2EE, way over at the right hand edge of the cover.

Solveig
show more
17 years ago
EJB and other Jakarta /Java EE Technologies
"J2EE 1.4: The Big Picture" hunt-the-pun game
It's actually to do with the JNDI thing.

Originally posted by John Zukowski:
>> Another one is a word and an image

The Bean Pool I presume?

To serve and protect vs. To protect and serve?

The error in "The Java Server Pages" building, as opposed to JavaServer...

Originally posted by John Zukowski:
What do you recommend as the next book, after someone finishes reading your book?

If you want to write that J2EE code, then either Head First EJBs or Head First Webby Things (not the exact title but that's the gist).

If you want to head in more of an architectural direction then I'm not sure; I'll buzz Mark to give an answer.

Aside from that, I always recommend "Confederacy of Dunces" as one of my favorite works of fiction, and for the nonfiction crowd, I give thumbs up to all the Oliver Sacks stuff about neurology. ;>