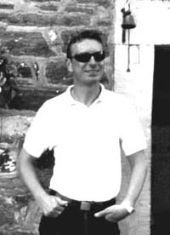 In Memoriam - Philippe (Phil) Maquet
I was terribly shocked and profoundly saddened yesterday when I learned of Philippe's tragic death. I truly believed one of the bright lights in this world had been extinguished and I was left feeling the world had become a darker place due to his passing.

I've had a day now to digest this unwelcome news and I've come to the realization that I was extraordinarily fortunate to know Philippe, if only through Java Ranch. His was a first rate mind. He was a natural teacher. The power and clarity of his expression was matched only by the depth of his enthusiasm. He had a mastery of his adopted language that would be the envy of most native English speakers. He possessed a generosity of spirit that is both rare and precious. In his writing he demonstrated a kindness, a sense of humor, and a playfulness that often brought a smile to my face and I happen to believe that's no small thing.

I know he was an inspiration to me and I think to others as well. I think he has made me a better person by his example. He must have known that the world is a better place for his efforts. He has my utmost respect for what he accomplished.

I send his entire family, especially Virginie, Nic, and Max, my deepest condolences. I can't really imagine how terrible this unexpected loss must be for you and for his close friends. I believe the good that a man does during his life does not end when his life is over. In a sense the good Philippe did during his life will live on in the people who knew him and whose lives he touched. The gifts we received from Philippe can never be taken away as long as we remember them and honor his memory. I hope Philippe's spirit will continue to animate Java Ranch in the years to come.

Philippe, you will be missed and long remembered. Thank you so much for all you did.

I'm glad to see you get an excellent score, especially the perfect scores on the Locking, Data Store, and the Network Server sections.

Best wishes to you on the SCEA and all your future endeavors.
show more
18 years ago
Certification Results
Score results?
Congratulations Maria

Best wishes for your next challange.
show more
18 years ago
Certification Results
Thanks George
Hi Maria,

Thanks very much for your kind words; you are most welcome. I do value clarity of expression a great deal, but I'm afraid it remains for me an elusive goal. I'm glad if I've been some help to you. Unfortunately, I haven't had the time lately to visit this forum much. I wish you success with your project and with all your future endeavors.
show more
18 years ago
Developer Certification (OCMJD)
Passed Bodgitt&Scarper with 353/400
Congratulations Adrian

I missed the beta for SCDJWS, so I'll probably tackle the SCEA next.
show more
18 years ago
Certification Results
Passed SCBCD with 86%
Hi Christer,

...and on the perfect locking score

Best wishes in all your future endeavors.
show more
18 years ago
Certification Results
Passed 365/400--Thanks all of you
Peter,

Congratulations too on the perfect locking score

Thanks for your kind words; you are most welcome.

Best wishes for your future endeavors.
show more
18 years ago
Certification Results
Passed SCWCD (old version) with 83%
Recommendations for those studying for the SCWCD:

1. SCWCD Exam Study Kit: Java Web Component Developer Certification, by Hanumant Deshmukh and Jignesh Malavia. The one book I think you need to study for this certification. Contains a mock exam but I can't comment on it because I lost the CD before I could use it

2. Free (with a quick mandatory registration) mock exam at http://www.j2eecertificate.com/.
This is a superior mock exam site (they also have sites for the SCJP and SCBCD) which goes to show that, like javaranch itself, sometimes the best things in life _are_ free. After completing SCWCD Exam Study Kit, I believe the "learning by testing" strategy at this site is very effective. I suggest studying each section first and then going back and studying any faults. Continue studying the faults until there aren't any more. Then take the difficult exam (20 of the most often missed questions). Then take the final exam. I scored 88% on the final mock exam and 83% on the actual exam.

So, my sincere thanks to Hanumant and Jignesh, and the www.j2eecertificate.com people, who together made studying for the exam a very positive experience.

I also used the following books:

FWIW, my lowest scoring sections were: