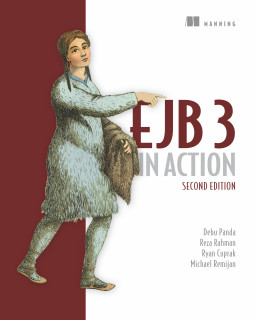 posted 6 years ago
I give this book 9 out of 10 horseshoes.

I really liked the story at the beginning comparing 3 reincarnations to the three versions of EJB. The Turtle Shipping Company and Snail Trucking example was also very cute. As were the chicken and frog.

One page 17, the text after the example talks about not needing an interface, but the code example has an interface. There is also a mix of EJBs and EJB's used in the book. I think this comes from having five authors. (The four real authors plus them originally. Because writing is like code in that after a certain point it is like someone else wrote it.) The fact that these are the worst things I can say about the book, is a good thing though.

The explanations were great especially the section on AOP, comparing EJB vs EJB Lite and when to use each session bean type. There are good warnings and caveats throughout. There was also a great intro to Web Sockets.

I thought I knew about the topic and still managed to learn a few things. I learned Seam became CDI, that you can use a constructor in the select clause of queries and about the embeddable container.


---
Disclosure: I received a review copy of this book from the publisher for reviewing it on behalf of CodeRanch.